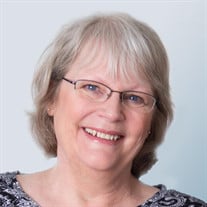 Janis “Jan” Kyle Kristjanson, age 63, passed away on Monday, October 21, 2019 after battling ALS for 3 years. Jan was born on September 18, 1956 in Grafton, ND to Hannes Kristjanson and Elizabeth (Elsie) Bjornson. When Jan was 9 months old, the family moved to Grand Forks, ND where Jan attended Viking Elementary and graduated from Red River High School in 1975. She would eventually graduate from Minot State University with a Bachelor of Science in Accounting. From her first marriage, Jan welcomed two boys into the world, Jeremy and Kristjan. And, in 1987, Jan met her husband and fellow lake-lover, Tom Karch. They married at Metigoshe Ministries in Bottineau, North Dakota on July 11, 1992. Their marriage brought a busy and loving home full of boys with the addition of Tom’s sons, Justin and Aaron, and their son, Paul, just a year later. In 2004, Jan was hired as Controller at Northeast Nebraska Public Power District and she, Tom and Paul made their home in Wayne, Nebraska. Not only was this Jan’s proudest career accomplishment, but Jan found great friendships through church and scrapbooking in Wayne. Jan’s last years were spent in Fargo, ND close to her children and grandchildren. However, Jan’s most beloved place was their cabin on Lake Ada in Backus, MN. Jan loved the lake (with sweet tea and Oreos), quilting, scrapbooking, her dog Sadie and back-seat driving. Both of Jan’s parents were of Icelandic descent and Jan considered herself a proud Icelander. However, the highlight of her life were her grandchildren. Jan’s sons describe her as “sassy”, “protective” and “determined”, qualities they all admire and agree made for some memorable moments. Jan is survived by her husband, Tom Karch; her sons, Jeremy (Amanda) Helgoe, Kristjan (Amy) Helgoe, Paul Karch; her step-sons, Justin (Joanne) Karch, Aaron (Sara) Karch and seven grandchildren: Ellie, Raea, Parker, Ava, Will, Bjorn and Gretta; her sister, Doreen (Bruce) Marston; her brothers, Keith (Arlinda) Kristjanson, and Kenny (Peggy) Kristjanson. She is preceded in death by her parents, Hannes and Elsie, and her brother, Brian Kristjanson. Jan has requested that any memorial donations be made to the ALS Association.

The family of Janis K. Kristjanson created this Life Tributes page to make it easy to share your memories.

Send flowers to the Kristjanson family.