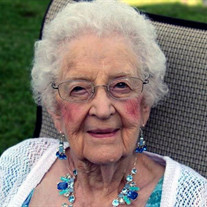 Rev. Janet Reed Miller, 99, died on June 2, 2019, at Bethany on University, in Fargo, ND. A champion for peace with justice and equality for all purposes and peoples, Janet lived her life sharing her faith, beliefs, and relationship with her creator God through her Christian Education ministry, her shared ministry with her husband, Rev. Cecil F. Miller, and in her own ministry as one of the first women to be ordained Elder in the United Methodist Church. She was born and raised in Erie, PA, the daughter of George and Daisy (Crain) Reed. She earned degrees in Bible and Philosophy from Westminster College in 1941, and a Master’s degree in Christian Education from Union Theological Seminary, a division of Columbia University, in 1946. While working as a Christian Education Director in Morgantown, WV, she met Cecil “Bud” Miller. They came from completely different backgrounds but found joy in each other’s company. Janet and Cecil married on June 15, 1946. She served First Methodist Church in Mitchell as the Christian Education Director while Cecil earned his degree from Dakota Wesleyan University. They moved to Chicago after graduation where Cecil went to Garrett Evangelical Seminary. After seminary, the family moved back to South Dakota and served churches in White, Miller, Arlington, and Huron. In 1967, the family moved to Grand Forks, ND, where they served Wesley United Methodist Church. They moved to Fargo in 1973 as Cecil was appointed District Superintendent for the United Methodist Church. Janet was ordained a Deacon in the United Methodist Church in 1979. She continued her education and earned her second Master’s degree, a Master of Divinity, from San Francisco Theological Seminary in 1984, and was ordained an Elder in the United Methodist Church. The Reverends Janet and Cecil Miller served as equals and co-pastors at Epworth United Methodist Church in Valley City, ND, and at First United Methodist Church in Jamestown, ND, until their retirement to Fargo in 1987. They later served the Casselton/Leonard and the Arthur/Hunter/Erie United Methodist Churches for a few more years before they retired again and moved back to Fargo “for good.” Janet valued her work with United Methodist Women, Church Women United, P.E.O., AAUW, AAUW Book Club, FM Area Music Club, the Board of Native American Christian Ministry, the YWCA, and her First United Methodist Church Seekers Sunday School group. In the spirit of all that is Rev. Janet Reed Miller, she had one last challenge for all of us: “Whatever you do, do it for the good of others.” She is survived by her family; her children—David Miller (Regina, SK) Sue (Al) Goehring (Wimbledon, ND), and Peter Miller (Cincinnati, OH); her grandchildren—Jeremiah (Shaneal) Miller (Rock Springs, WY), Molly (Brian) Bestge (Lake Park, MN), Katie (Kurtis) Karn (West Fargo, ND), Joe Miller (Stillwater, MN), Josh Miller (Stillwater, MN), Ashley Miller (Stillwater, MN), Andrew (Caitlin) Miller (Moose Lake, MN), and Ariel Avison (Regina, SK); her great-grandchildren—Tanner and Payton Miller, Sam and Mara Bestge, Kingston and Kendrix Karn, and Harper Miller. She also cherished and valued her many dear friends. She was preceded in death by her husband, Rev. Cecil F. Miller, their son, Marcus Miller, and their son and daughter-in-law, Art and Deb Miller, as well as her parents, George and Daisy Reed, brother George Reed, and sister Catherine Reed. In lieu of flowers, donations are requested to fund the Revs. Cecil and Janet Miller Family Foundation for Pensions (PO Box 460 Mitchell, SD 57301-0460).

Rev. Janet Reed Miller, 99, died on June 2, 2019, at Bethany on University, in Fargo, ND. A champion for peace with justice and equality for all purposes and peoples, Janet lived her life sharing her faith, beliefs, and relationship with her... View Obituary & Service Information

The family of Janet Reed Miller created this Life Tributes page to make it easy to share your memories.

Send flowers to the Miller family.