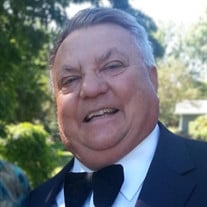 Jim's Prayer Service livestream can be viewed here: https://vimeo.com/699036467 Jim's Memorial Service livestream can be viewed here: https://vimeo.com/699036685 Jim's tribute video can be viewed here. https://www.tributeslides.com/tributes/show/ZCFPD2RKWB8JWY2Y James "Jim" Charles Wolslegel of Fargo, ND, passed away at the age of 72 on April 11, 2022, surrounded by his family at Sanford Medical Center, Fargo. He was the third child born to Elmer & Ruth (Paul) Wolslegel in Wausau, WI, on October 16, 1949. He attended school in the Wausau school district and graduated from Augsburg University in 1972. Jim married Cynthia Brakke on September 15, 1973 in Blooming Prairie, MN. He worked as a salesman in the flooring industry for 44 years, beginning with Neidhoefer & Co. in Minneapolis and culminating at Fargo Glass and Paint, Fargo. He was a salesman to the core, even selling geraniums from his hospital bed. He loved to travel and through his sales positions, Jim and Cindy had opportunities to travel to places like Puerto Vallarta, Hawaii, Dominican Republic, St. Maarten, and Norway as well as cruises to Alaska and islands in the gulf. Many family vacations involved travels around the states and weeks on favorite lakes. Last fall, Jim and Cindy were able to travel to Iceland to tour the country and see the northern lights. He had a heart for service and joined the FM Sertoma Club in 1984. Often dragging a family member or two along, he spent many holidays putting up flags at businesses around Fargo, a fundraiser to support Sertoma's deaf and hard of hearing programs (flags now displayed in Lindenwood). For over 20 years, he actively worked on Sertoma's "Holiday Lights in Lindenwood Park." Recently, he also became a member of the Optimist Club of Fargo, which has helped with "The Lights" as well. In retirement he also enjoyed volunteering at "A Place for Hope." Having a strong faith, Jim and Cindy became members of Elim Lutheran Church when they moved to Fargo in 1979, where he also served a number of years on the church council. A project he was most proud of was Elim Re-habilitat, a collaboration with other organizations that bought, fixed-up, and sold homes to those who otherwise would not be able to afford one. He loved to sing - or make a joyful noise - and especially enjoyed hymns, even if he couldn't always remember the words. After college, he had the opportunity to play on a softball team, his first experience with organized sports. He always loved being outdoors and spent many days camping, canoeing, fishing, biking, XC skiing, golfing, caring for his many flowers, or just relaxing on his deck or in front of a firepit - usually in the company of friends and neighbors. Jim was often called the life of the party. A friend recently described him as "one of the very best - so kind, caring, funny, generous and goofy." Jim will be dearly missed by his wife, Cindy; children, Beth (Marcy) Redmond, St. Louis Park, MN and Ryan (Sarah Kneeland) Wolslegel, St. Paul, MN; siblings, Jan (Roger) Barenwald, Robert (Carol) Wolslegel, Phyllis Grohn, Lois Hilger, all of WI; In-laws (& "out-laws"), Paul (Kathy) Brakke, Keith (Ann) Brakke, Tom (fiancé Amanda) Brakke, Brian Brakke, as well as former fellow "out-laws", Sally Chapman, Holly Brakke and Tom Hilger. He happily welcomed bonus grandchildren, Jessica & Emma Yarger & foster grandchildren into the family. He is also survived by many nieces, nephews, and cousins; and other beloved family and friends, too numerous to name here. Jim was preceded in death by his parents, Elmer & Ruth; Mother-in-law, Rose Ann (Brakke) Walstrom (Clayton); brother-in-law, Cliff Grohn; cousin, David Wolslegel; and his aunts and uncles. A visitation will be held at Hanson-Runsvold Funeral Home on Sunday, May 1, 2022 from 3-5 PM with a prayer service at 5 PM. Visitation will continue on Monday, May 2, 2022 from 1-2 PM followed by a Celebration of Life at 2:00 at Hope Lutheran North Campus in Fargo. A live stream of both services can be viewed on the Hanson-Runsvold website. You are invited to leave comments and memories on his obituary page. In lieu of flowers, the family encourages memorials to Camp Sertoma of the Great Plains Region, Sertoma Annual Fund, Hope Blooms, Elim Lutheran Church, or any charity of your choice.

The family of James Charles Wolslegel created this Life Tributes page to make it easy to share your memories.

Send flowers to the Wolslegel family.