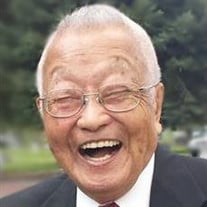 James M. Sugihara, a longtime major administrator at North Dakota State University, died November 12th, 2019 at Bethany Homes. Over the course of a nearly half-century career in higher education, Dr. Sugihara compiled a distinguished record of achievements. Beginning in 1946 as an instructor of chemistry at the University of Utah, he progressed to the rank of professor. In 1964 he was invited to become dean of North Dakota State University's College of Chemistry and Physics. Subsequent posts at NDSU included a deanship of the College of Science and Mathematics, dean of the Graduate School and director of research administration, and that of acting vice president for academic affairs. Dr. Sugihara retired from NDSU in 1989, and was appointed a professor emeritus by the North Dakota Board of Higher Education. In 1972 NDSU students honored him with the Blue Key Doctor of Service Award, and NDSU acknowledged his contributions with the conferral of an Honorary Doctor of Science Degree in 1998. Born in Las Animas, Colorado, August 6, 1918, to Bansaku and Takeyo (Kubota) Sugihara, James enrolled at the University of California during the 1930s, graduating with honors in 1939. But as was true with virtually all West Coast Japanese-Americans following the outbreak of World War II, he was sent to a relocation camp in Utah, forever looked upon as a low point in his life. But it was there that James me May Murakami (clearly recalled as a high point of their lives). As a graduate student, James was allowed to leave the relocation camp to continue his studies at the University of Utah. He and May were married June 5, 1944, and he earned a doctorate in organic chemistry in 1947. Prior to accepting the deanship at NDSU, Dr. Sugihara had built a reputation as a research scientist, popular classroom teacher and advisor to graduate students. Throughout his career, 56 reports of his sponsored research work were published in professional journals, primarily those of the American Chemical Society. In 1996, to show their appreciation the role he had played in their lives and careers, a dozen Ph. D. recipients who had been his advisees, traveled from both coasts to honor Dr. Sugihara at the couple's Pelican Lake, Minnesota home. Letters of appreciation followed from many others who had been unable to attend the event. In addition to his duties as a professor and administrator, Dr. Sugihara was a member of the Resources Research Committee of the North Dakota Legislative Council steering committee for the Regional Environmental Assessment Program (1974-78); the steering committee of the Southeast Area Health Education Center of the North Dakota School of Medicine (1975 - 82); the U.S. delegation (Department of Energy) of five which met (September 1978) with U.S.S.R. oil experts on geochemistry and fundamental properties of petroleum in Moscow, Leningrad and Volgograd; and chairman of the North Dakota Committee for the National Science Foundation Experimental Program to Stimulate Competitive Research (1979-80). His involvement in the Fargo/Moorhead community included membership in the Board of Directors of Cass-Clay United Way (1980-86), and presidency of that board (1984-85). Dr. Sugihara also became a member of the board of the Pelican Lake Property Owners Association in 1990, serving as vice president from 1994-1998, and as president from 1998 to 2000. Dr. Sugihara is listed in Who's Who in America, World Who's Who in Science, American Men and Women of Science, Who's Who in the Midwest, the Directory of International Biography, Leaders in American Science, Leaders in Education, and Who's Who in American College and University Administration. Following Dr. Sugihara's retirement from NDSU, he and his wife spent winters in Sun City, Arizona, and summers in Fargo and their Pelican Lakes home in Minnesota. Survivors include: two sons, John (Chris), Boise, Idaho, and Micheal, Fargo; grandson, Brandon (Cassandra), and three great-grandchildren, Olive, Connor, & Iris, Fargo. In lieu of flowers the family would like donations to go to The James and May Scholarship Endowment at NDSU (https://www.ndsufoundation.com/james-and-may-sugihara-scholarship-endowment) or to Hospice of the Red River Valley (https://secure.acceptiva.com/?cst=373eaf) There will be a gravesite service with the family in Salt Lake City, Utah.

The family of James Masanobu Sugihara created this Life Tributes page to make it easy to share your memories.

Send flowers to the Sugihara family.