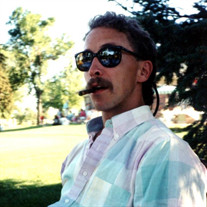 It is with great sadness that we announce the passing of James Edward Simonson of Fargo, ND, in his home on the morning of August 14, 2020. James (Jim) was born to Edward and Susan (Bassett) Simonson in Fargo on Christmas Day. He graduated from Fargo South High School in 1975, and went on to earn degrees in Business Administration and Aviation at the University of North Dakota. He spent a brief time in Minneapolis, MN before returning to Fargo to join the family business, Mid-America Steel, in 1984. He went on to become Vice President of Purchasing and served on the Board of Directors until his retirement in 2016. Jim was a dedicated member of the Rotary Club in downtown Fargo with a near-perfect 30+ year attendance record. He was an active volunteer in programs including Jr. Great Books, Boy Scouts of America, English as a Second Language. He generously gave to many conservation and humanitarian organizations. Jim married Darcy (Hogness) Simonson in 1989 and was blessed with three wonderful sons. He was a passionate outdoorsman and impressed upon his sons the value of life both great and small. He especially loved spending time on Lake of the Woods and in the ponds and prairies of North Dakota. He read to his boys with such pleasure and instilled in them a love of literature, a hunger for knowledge and an appreciation for beautiful things. As his children grew up he facilitated many dinner table debates and enjoyed seeing his boys express their passions. Jim enjoyed good food and cooking with his family. He was mindful of the world around him and could while away the afternoon in a hammock “taking it all in”. You could always trust Jim was home if music was playing and turned up loud, be it jazz, bluegrass, rock or classical. He lived a good and comfortable life and shared his home with whoever needed one. In 2012 Jim began a loving relationship with Julie Ann Overvold, a high school crush realized in his later years. He enjoyed spending time with Julie and her family, especially at the cabin on Rose Lake, which they shared. Jim left this world suddenly and unexpectedly and will be deeply missed. He is survived by his three sons, Benjamin James, Edward Hunter and Cole William Simonson; his brothers, John (Kelly) and Jared (Carrie); as well as many family and friends who love him dearly. He was preceded in death by his parents and his sister, Marjorie (Mardy) S. Young. Memorial donations may be given to Dollars for Scholars. A private family service was held in Jim's honor.

It is with great sadness that we announce the passing of James Edward Simonson of Fargo, ND, in his home on the morning of August 14, 2020. James (Jim) was born to Edward and Susan (Bassett) Simonson in Fargo on Christmas Day. He graduated... View Obituary & Service Information

The family of James Edward Simonson created this Life Tributes page to make it easy to share your memories.

It is with great sadness that we announce the passing of James...

Send flowers to the Simonson family.