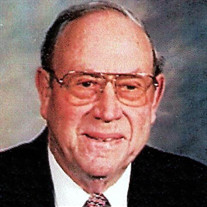 James Alexander McAndrew, Sr., 98, of Fargo, North Dakota passed away Tuesday, June 4 at New Perspective Senior Living center in West Fargo. Jim was born May 25, 1921, in Fargo to John D. and Margaret (Lamont) McAndrew, a pioneer farming couple in the Grandin area. His first home was the Cass County farm east of Grandin along the Red River. After age seven, Jim and his family spent winters in southern California and summers at the farm. He attended elementary and secondary schools in Sierra Madre and Pasadena, and college at the University of Redlands in Redlands, California. Jim married Doris Gage of Pasadena, California in February, 1943. He brought his bride—a city girl—to the family farm, which they operated together successfully from 1943 until 1973 when they leased out the land and returned to California where they settled on the coast in Solana Beach, north of San Diego. There Jim was involved in the real estate and property management business, and was elected as director of the Santa Fe Irrigation District and served for sixteen years. During those years Jim and Doris enjoyed many trips, exploring different places and cultures around the globe. In 2002, Jim and Doris returned to the Fargo area and resided at Touchmark at Harwood Groves. They treasured those years being close to Jim Jr. and his family. Jim and Doris were very pleased to celebrate their 70th wedding anniversary in 2013, just shortly prior to Doris’ death. Jim was a lifetime member and elder of the Presbyterian Church. He was a member of the Masonic Lodge for more than sixty years, and a past Master of his lodge, as well as a Shriner for many years. Jim was preceded in death by his parents, his sister Agnes Coit of Ventura, California, and his wife, Doris. He is survived by his two children: Dr. Jim McAndrew, Jr. (and fiancée, Susan Glur) of Fargo and Margaret McAndrew Beasley (and husband, Mark) of Abilene, Texas; his five grandchildren: John McAndrew (and wife, Karmen) of Fargo, Steve McAndrew (and wife, Jenny) of Plymouth, Minnesota, Scott McAndrew (and wife, Sarah) of Fargo, Susie McAndrew of Fargo, and Alexi (Beasley) Alvis (and husband, John) of Fort Worth, Texas; and eleven great grandchildren. Visitation will be on Monday, June 10, from 10-11 a.m., followed by the memorial service at 11 a.m. at First Presbyterian Church in Fargo. Memorial gifts will be presented to one of Jim and Doris’ favorite charities: Mercy Ships, a Christian nonprofit organization which uses hospital ships to transform lives and serve nations around the world, or donations can be made directly to: mercyships.org

The family of James A. McAndrew created this Life Tributes page to make it easy to share your memories.

Send flowers to the McAndrew family.