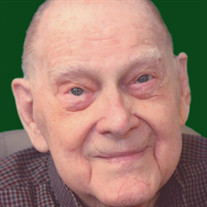 Funeral Service for James will be streamed at 10am, Monday, June 22, 2020 and will be available after here: https://vimeo.com/430013124 James Russell Krogstad died peacefully on June 16, 2020 at Bethany Homes at the age of 96. Known to his friends as Russ, he was born on August 21, 1923 in Hammer, South Dakota to Henry and Myrtle Krogstad. After numerous moves, the family settled in Fargo, North Dakota, where Russ graduated from Fargo Central High School in 1940 and studied at North Dakota State University. Russ served in World War II in the Army Medical Corps in Guam. After his discharge from the Army in 1946, Russ returned to Fargo where he was employed by St. Luke’s Hospital as an orderly. He met his future wife, Verna, and they married on October 4, 1948. In 1948, Russ started working for Burroughs Corporation, where his job as a field engineer moved him from Devils Lake, to Grand Forks, and eventually Fargo. Russ was an avid fisherman and hunter, who visited places such as Lake of the Woods, and western North Dakota. In later years, he found the joy of golfing. He participated in the Senior Tour for many years, enjoying the camaraderie and competition with fellow golfers. He helped many young golfers in the community by mentoring them throughout the years. Russ was preceded in death by his beloved wife, Verna, who died in 2003. He is survived by two children, John (Dani) Krogstad, Richland Hills, TX, Mary (John) Whaley, Fargo, ND; five grandchildren, Tom Krag, Fargo, ND, Jenny (Joey) Garcia, Pittsburgh, PA, Christa (Kevin) Ackley, Fargo, ND, Royce Nelson, Ft. Lauderdale, FL, Shane (Chris) Jakober, Woodland, CA; and one great grandchild, Joey James Garcia, Pittsburgh, PA. Russ was a member of Olivet Lutheran Church in Fargo. The burial will be at Riverside Cemetery, Fargo, North Dakota.

The family of James Russell Krogstad created this Life Tributes page to make it easy to share your memories.

Funeral Service for James will be streamed at 10am, Monday, June...

Send flowers to the Krogstad family.