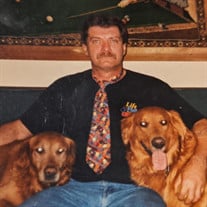 On Saturday June 5, 2021, James (Jim) Hanson of Fargo passed away in his home. On July 18,1952 Jim was born to Alfred and Martha (Remaine) Hanson. He grew up in Fargo, ND with his brother Vernon where he also attended school. Jim was United in Marriage to Susan (McGough) Hanson in 1974. Together they had four children. They made their home in Moorhead, MN before moving to Dilworth, MN. Later Jim moved back to Fargo in 1981 where he lived out the rest of his life. Jim spent most of his career in construction but also worked awhile as a mechanic at American Crystal Sugar in Moorhead. Jim worked a lot of handyman jobs, he had so many talents, from building decks, landscaping, and painting houses. Before Jim became disabled he was working security at the Fargodome. Jim was the life of the party. He loved to be around his friends enjoying a beer or two. Most of all he loved his family. His kids and grandkids were everything to him. Jim had many interests and talents. He loved to read. He also loved music and had a substantial collection of both. Jim was also a collector of many things. He enjoyed collecting different kinds of knives from the smallest to the very biggest of blades. He loved jewelry, especially rings that had different kinds of skulls on them. He was also a collector of wrist watches and various US coins. Jim dabbled into photography and took many beautiful pictures. He was a card carrying member of the Fargo Library where he enjoyed reading all kinds of books. Jim loved to draw and paint. He could create a masterpiece out of just about anything he set out to do. Jim was also a card carrying member of the ND Game and Fish. He enjoyed fishing anytime he had the chance. Jim was happy just to be outdoors and being with people, it was hard for him when his health started to decline. Jim suffered many Health issues as of recent that prevented him from living the life he really enjoyed! Jim will be greatly missed by his family and many friends, especially for his whimsical sense of humor. Jim is survived by his daughter Stephanie Hanson, Dilworth; son, Christopher Hanson, Dilworth; daughter, Miranda Hanson (Steve Pavola), Dilworth; and son, James (Jessica) Hanson, Dilworth; grandchildren, Abigail Hanson, Grafton, ND; James Hanson, Liam Hanson, Christopher Krause, Shealyn Pavola, and Zayne Pavola of Dilworth, MN; and his many friends. He was preceded in death by his parents, Alfred and Martha Hanson; brother, Vernon Hanson; and his three grandchildren, Donovan Hanson, Grayson Pavola and Mauriana Pavola.

On Saturday June 5, 2021, James (Jim) Hanson of Fargo passed away in his home. On July 18,1952 Jim was born to Alfred and Martha (Remaine) Hanson. He grew up in Fargo, ND with his brother Vernon where he also attended school. Jim was United... View Obituary & Service Information

The family of James Hanson created this Life Tributes page to make it easy to share your memories.