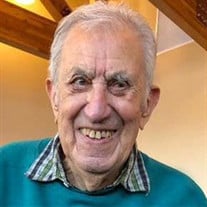 James S. Ferragut was born in Boston, Massachusetts, as Sebastiano Ferraguto, on April 16, 1921, the second of five sons. His parents Andrew and Marie Ferraguto married in Sicily and emigrated to the United States in 1919. He graduated from the Boston Commons High School For Boys, where he received his ROTC training. March 21st, 1941 at the age of 20, he enlisted in the Army/Air Force. He earned his Advanced Instrument Flying Instructor's degree for WWII's B-25 Bomber, at Marshall Field in Alabama. He spent the next three years as one of 20 AIFI's, training the newest incoming group of B-25 pilots. He was transferred to Hickham Military Flight Base in Hawaii and finally to Iwo Jima where he and his team set up an Air and Rescue Center. His team was charged with searching and sealing off enemy caves when the Japanese surrendered. Returning to Boston, he soon left for a job in Chicago, where he legally changed his name to James Sebastian Ferragut. It was in Chicago where he met the love of his life, Darleen Wilson. They married in Hibbing, MN.and was transferred as the Regional Sales Manage to Duluth, MN where his sons Wilson and James were born. He spent 6 years in Duluth and Minneapolis before being transferred to Fargo where third son Michael was born and Jim and Dar decided to raise their young family. He built a successful career in at Fargo Insurance before finding his passion as a residential and commercial real-estate agent. He was a partner in Real Estate 5 and continued to manage commercial properties until he retired at the age of 91. Jim loved life. His natural charisma was infectious. His Italian heritage set him apart from the Scandinavian Fargoans of the late 1950's. He was a good father, the neighborhood kids loved him for playing baseball with us. He knew and engaged our personal school chums. But he was even a better grandfather. Jim and Dar's weekend sleepovers with his grandkids at their home and our beloved Pelican Lake always included lessons on etiquette and "non-negotiable lake rules”. But it was the late night viewing of the Tonight Show and SNL, endless assortments of candy, popcorn, the gumball machine, Dr. Pepper, board games and Saturday morning breakfast trips that helped shaped them to be the remarkable people they are. He extended his love and the spoiling of his great grand-kids Aidry, Vita and Tuni until his final living breath. Jim lost his wife Darleen to Alzheimer's in 2015 and is survived by sons Wilson (Los Angeles), his daughter Cindy Foertsch, (Kansas City), James and Terri (Fargo), Michael (Minneapolis). Grandchildren Dr.Justin (Kiley) Ferragut (Chicago), Ashley(Brett) Johnson (Fargo), Lauren (Craig) Carlson (Geneva, NY), Gabriel Ferragut (Eugene, OR) and his beloved great-grandchildren, Aidry & Vita Johnson and Tuni Jo Carlson. A private service was held with family on Friday, December 20, 2019.

James S. Ferragut was born in Boston, Massachusetts, as Sebastiano Ferraguto, on April 16, 1921, the second of five sons. His parents Andrew and Marie Ferraguto married in Sicily and emigrated to the United States in 1919. He graduated from... View Obituary & Service Information

The family of James Sebatian Ferragut created this Life Tributes page to make it easy to share your memories.

James S. Ferragut was born in Boston, Massachusetts, as Sebastiano...

Send flowers to the Ferragut family.