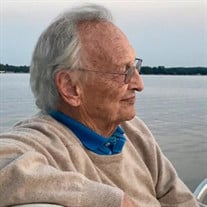 Jim's Time of Sharing can be seen here: https://vimeo.com/592872655 James Eaton Dixon, age 97, was born in Grand Forks, North Dakota, on June 16, 1924, to George and Isabel Dixon. Jim and his parents moved to Fargo shortly there after. In 1928, a sister, Laura, and in 1936 a brother, David, joined the family. Jim attended school in Fargo and graduated from Fargo Central High School in 1942. After graduation, he enlisted in the Air Corp where he served from 1942 to 1946. He attended the University of Wisconsin in Madison from 1946 to 1950, graduating with a Bachelor of Science degree in civil engineering. In 1950 he returned to Fargo to work in the insurance business. Shortly after, he earned his CPCU (Chartered Property and Casualty Underwriter) designation at which time he was one of the first two insurance agents in North Dakota with this designation. He established Dixon Insurance in 1953 and was self-employed in the business as an independent agent for 37 years. During his career, he served as president and on the board of directors of the Association of Independent Insurance Agents for four years. He retired from the insurance business in 2002, at which time he sold Dixon Insurance to his son Jed and daughter Melissa who continue to operate the business. In 1953 he married the love of his life, Virginia [Ginny] Jordahl Slater. Along with a new wife, he welcomed Virginia’s two young children, son Stephen and daughter Sue Ellen, whom he adopted and raised as his own. He later was blessed with two additional children: son Jed and daughter Melissa. In 1980, along with two partners, he formed the Bridge Company to construct and operate a new bridge across the Red River to facilitate the flow of traﬃc between Moorhead and Fargo. This was the first privately held toll bridge in North Dakota. Jim, Virginia, and their family enjoyed winters skiing and snowmobiling in Montana and other Western states and summers sailing, skiing, and golfing at Lake Melissa near Detroit Lakes, Minnesota. Jim and Virginia traveled to Europe, Africa, Canada, and throughout the United States. They made several trips to enjoy the Olympic Games, which brought them great joy. Jim particularly enjoyed owning and operating motor homes and experiencing the R.V. travel lifestyle. Jim had a strong faith and was a longtime member of the First United Methodist Church in Fargo and supporter of the Shoreham Chapel on the north shore of Lake Melissa, Minnesota. After the death of his beloved wife, Virginia, in 2008, he was blessed with a second special relationship with Callie Dady, with whom he enjoyed many years of companionship. Jim is survived by his brother David Dixon, his children Stephen Dixon (Carol), Sue Ellen Wasserburger (Jon), James E. Dixon Jr. [Jed] (Raila), and Melissa Dixon Armfield (Jim) eight grandchildren and five great-grandchildren. He was preceded in death by his wife, Virginia; his sister, Laura Hinderacker; his companion, Callie Dady; and his parents, George and Isabel Dixon. Jim loved to be surrounded by friends and visitors and always had time to share stories. He will be missed by many who loved him and enjoyed his friendship and vivacious personality. Jim will always be remembered for his thirst for life, happiness and for his giving nature. Any contributions in his name may be made to the Shoreham Chapel, located at Lake Melissa, Minnesota; the First United Methodist Church Foundation, located in Fargo; or to Hospice of Red River Valley, located in Fargo. Jim's Tribute Video can be seen and copies ordered here: https://www.tributeslides.com/tributes/show/423Q8T52N9B24347

The family of James Eaton Dixon Sr. created this Life Tributes page to make it easy to share your memories.

Send flowers to the Dixon family.