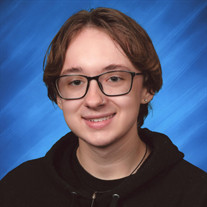 Kayla Rose Deplazes was born April 4th 2002 to David and Tracy (Roth) Deplazes in Fargo, ND. Kayla attended pre-school at A Childs World, elementary school at Lewis and Clark Elementary and middle school at Carl Ben Eielson. Kayla was involved in Just for Kix, a variety of Fargo-Moorhead Community Theater plays, and she was involved in Hope Kids. Kayla loved all animals. Throughout her life she had a succession of much loved pets including: Scooter, Miley, McCoy, KitCat, Chino, Erik and Leo. She spent many hours socializing cats at Cats Cradle shelter in Fargo. Kayla was born driven to learn, was a lifelong reader and she took a book with her wherever she went. She started reading at three years old and started piano lessons in Kindergarten. She enjoyed her piano teacher, Wanda Wavra, very much over many years. Kayla loved to ride motorcycle with her dad. In 2015, Kayla made the decision to transition to James Daniel. James’ family supported this decision and did their best to help him feel comfortable and develop into the person he hoped to become. James attended Fargo South High School through his junior year and was currently attending Woodrow Wilson. James was expected to graduate December 2019. James planned to start Minnesota State University Moorhead in January 2020. James had a passion for music. He studied piano for nearly 11 years. James also studied guitar, played viola in school orchestra and sang in the school choir. In addition to playing music, he loved to listen to all genres of music except country. James had hundreds of CD’s in addition to an enviable collection of vinyl. Throughout his life James also loved to be involved in theater. When he was young he performed and as he got older, he shifted to the technical side including lighting, sets and sound. He was stage manager for the production of “Charleston”. The last few years James developed an interest in all aspects of film making. He participated in film-making at Trollwood Conservatory. At this point he chose to pursue a career in Film Production, which he intended to major in at MSUM. James studied a year of German followed by three years of Spanish, and participated in a school sponsored trip to Spain in the summer 2019. He was an excellent student and earned an academic letter at Fargo South, he was also selected for Honor Society and was President of the Fargo South History Club. James Daniel died at his home in Fargo on December 4, 2019. James is survived by his father, David Deplazes; mother, Tracy (Travis) Knowler; grandmother, Sharon Roth, all of Fargo; grandmother, Cleo Deplazes, Devils Lake, ND; brother, Derrick Fournier and his son Hunter, Devils Lake, ND; uncles, Scott Roth, Costa Mesa, California; Mike (Glenda) Deplazes, Fargo, ND; aunt, Nola (Dan) Dahlen, Devils Lake, ND; cousins, Michael (Nettie) Deplazes, Jr., Ann (Matt) Pollert, Chris Dahlen, Michelle (Cullen) Nelson; and many friends. James was preceded in death by his paternal grandparents, Paul and Eloise Deplazes; and maternal grandfather, Donavan Roth.

The family of James Daniel Deplazes created this Life Tributes page to make it easy to share your memories.

Send flowers to the Deplazes family.