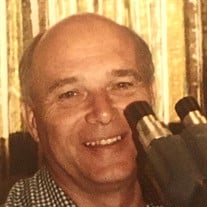 Prayer Service will be streamed here: https://vimeo.com/432540132 Dr. James (Jim) Heath Coffey was born on June 12, 1929, to Max and Dora Coffey in Omaha, NE. He died June 22, 2020, at Rosewood on Broadway in Fargo, ND due to complications from Parkinson’s Disease. Jim grew up in Nebraska and Iowa and graduated from Omaha South High School. He then attended Dana College in Blair, NE and the University of Nebraska-Omaha Medical School. It was during this time that he met and married his wife, Belva Joy (Lonn) Coffey, on September 26, 1952. He later joined a general medical practice with his Uncle Jim Coffey in Fairfax, MO. A phone call from the draft board informed him that he was number one on the list to be drafted, so he joined the US Air Force and requested the US Territory of Alaska for his active duty. He served two years at Elmendorf AF Base near Anchorage, AK as a flight surgeon. He then moved to Blair, NE and continued as a member of the Air Force Reserves and was later honorably discharged as a Major. Jim completed his residency in Pathology at Nebraska Methodist Hospital in Omaha. He joined the partnership at the Fargo Clinic in Fargo, ND in 1962, where he worked until his retirement. Jim had a very avid interest in photography. He had purchased his first camera with money he received for his high school graduation. During his years at Dana College, he joined the yearbook staff and learned to develop his own film. He joined the Fargo-Moorhead Camera Club when he moved to Fargo and received many awards and honors for his photography. He continued his interest into the digital photography era and became very creative with his subjects and his editing. As his Parkinson’s Disease progressed, it became difficult and eventually impossible to continue this hobby. Jim is survived by his wife, Belva Joy, and their six children, Robert (Kris) Coffey, Patrick (Shellie) Coffey, Laura (Russ) Nylander, Roger (Joyce) Coffey, Jerry (Lisa) Coffey, and Sandra Miller (Gordon Sykora); grandchildren, Matt (Melissa) Coffey, Erin (Leif) Wallin, Mason (Frankie) Coffey, Maggie Coffey, Sara (Kody) Backman, Katie Nylander, Kyle (Ashley) Nylander, Brooke (Darryl) Baker, Benjamin (Sierra) Coffey, Justin (Amanda) Coffey, Tony (Stacey) Coffey, Nathan (Jessica) Coffey, Brent (Jessica) Miller, and Tyler Miller; step-Grandchildren, Michael, Anthony, and Samantha Marra; great-grandchildren, Austin and Nolan Coffey; Beyla and Ivar Wallin; Lennon Coffey; Samantha and Kaci Backman and Brittney Norman; Camilla and Carina Nylander; Alexa, Baylee, and Deklan Nylander; Brady, Bryce, and Brett Baker; Stella Rose Coffey; Blaine and Landry Coffey; Owen, Raymond, Judd and Tess Coffey; James, Jack, Jennifer, and Jo Miller; Gracelyn and Cameron Miller; and great-great-grandchildren, Emma, and Adeline Norman. Other survivors are his fabulous siblings, Robert (Joan) Coffey, Richard (Joanruth) Coffey, Katy Flynn, Jean (Paul) Priestas, and Joan (Con) Smith, as well as many nieces and nephews and cousins. Visitation will be Thursday, June 25, from 5:00 to 7:00 and prayer service at 7:00 at Hanson-Runsvold Funeral Home, Fargo ND. A private family service will be at 11:00 on Saturday, June 27, at St Stephen’s Episcopal Church, Fargo, ND.

The family of Dr. James Heath Coffey created this Life Tributes page to make it easy to share your memories.

Send flowers to the Coffey family.