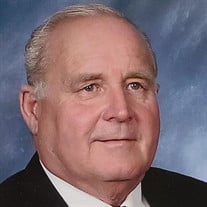 Ivan's service can be viewed here: https://vimeo.com/583065105 Ivan Curtis Haakenson of Fargo, North Dakota passed away July 22nd at the Sanford Hospice House in Fargo after a brief battle with cancer. Ivan, the only child of Henry and Gertie (Johannesgaard) Haakenson, was born August 16th, 1941. He was proud of his Norwegian heritage. His faith was very important to him. He was baptized at Norman Lutheran Church in Kindred, and confirmed at First Lutheran Church in Fargo where he remained a life-long member. Ivan graduated from Fargo Central in 1959 and attended Wahpeton School of Science. He remained close with many of his classmates and cherished their friendships. In July 1965, he married Shirley Aune, the love of his life and his wife of 56 years. Her family became his, and he embraced her siblings as if they were his own. They have countless lake stories and fishing tales. Ivan's passion for life and brotherly advice was always present. Ivan spent most of his career in the surplus and hardware business. He completed The Dale Carnegie sales program where he grew and fine-tuned his craft. Ivan opened 8 stores for Surplus Center (later Mac's ) while he was the general manager and buyer. In 1977 he and Shirley ventured out on their own to start Midwest Sales and Surplus. They lost the business to a massive fire in 1983, and Ivan returned to Dakota Surplus. After retiring from the surplus business, never one to sit still long, Ivan continued work part time for Cardinal Health. In retirement, he enjoyed gardening, often sharing stories of his childhood and the family farm in Kindred. His plot at the community garden allowed him to make more friends and grow his prized squash. He also took up woodworking, something he had not done since his scouting days. He was always generous, and loved to share what he grew in the garden or made in the shop with anyone who stopped to visit. Ivan would often say, "Your family is all you've got". He is survived by his wife Shirley and four children: Stacy (Carter) Anderson, Show Low, Az; Shawnda (Troy) Mickelson, Fargo, ND; Susan (Chris) Crocker, Great Falls, MT; and Steve Haakenson, Overgaard. AZ. Grandchildren: Blake (Jessica), Conner (Liz), Mattea Anderson; Taylor, Sophie, Spencer Mickelson; Buddy, Mason (Whitney) Crocker; Brooke (Tylor) Thomson; great grandchildren: Ezra, Brewer, and Harper Anderson; Paige, Tawnie, Bruce, Shauna, and William Crocker; and Gracyn Thomson; siblings-in-law: Judy Meyer, Kevin (Linda) Aune; nieces and nephews: Kim Meyer, Kari (Van) Lockett, Heather (Jeremy) Ostrowski, Dave (Leah) Aune, Patrick (Susan) Aune , Summer (Jack) Aune, as well as six great-grand nephews; and his life-long friend Gordon Monson and family. He was preceded in death by his parents; grandson, Andrew "Andyman" Anderson; and his brother-in-law, Bruce Meyer. His family is thankful for the staff at Sanford Hospice for their care, his friends at the garden for their work, and for all of our family and friends who offer us comfort during this time. Memorial Service: 2pm, Wednesday, August 4, 2021 with a visitation one hour prior at Hanson-Runsvold Funeral Home, Fargo, ND. Burial: Norman Lutheran Cemetery, Kindred, ND Condolences and memories may be shared at www.hansonrunsvold.com Arrangements entrusted to Hanson-Runsvold Funeral Home - Fargo, ND

Ivan's service can be viewed here: https://vimeo.com/583065105 Ivan Curtis Haakenson of Fargo, North Dakota passed away July 22nd at the Sanford Hospice House in Fargo after a brief battle with cancer. Ivan, the only child of Henry and Gertie... View Obituary & Service Information

The family of Ivan Curtis Haakenson created this Life Tributes page to make it easy to share your memories.

Send flowers to the Haakenson family.