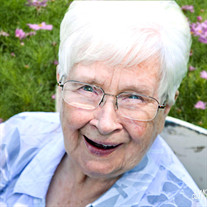 Iris was born to Donald and Maggie Snyder in Moundsville, West Virginia. She was the first of five children, followed by Elmer, Dorothy, Loretta and Helen. The family lived in West Virginia, Pennsylvania and Des Moines, Iowa, as Iris was growing up. She graduated from high school in 1939, and enjoyed working in the office at Pioneer Seed Company headquarters. As a young woman, she was invited to Des Moines Gospel Chapel by a friend, and it was there that her life changed - she learned of Jesus’ offer of salvation to all who would believe - and she was born again. Throughout her life she was committed to following the Lord, studying and memorizing scripture, and passing on what she learned to others, especially her children. Many others in her family came to know Jesus, totally changing the trajectory of her family tree. On a weekend in January, 1946,another friend, Rachel Hanson invited her brother Dan to visit in Des Moines and schemed to get Iris and Dan together. They were married in June, and over the next 18 years had 7 daughters. Most of their married life was spent in Grand Rapids, Minnesota, with 6 years in Washington state. She was a woman of many talents - sewing, baking, cake decorating, gardening, playing piano and organ, teaching - but most of all she loved people. Somewhat shy and unassuming, she still loved being with people. She was a fun hostess, and the house was often full of music. At one time so many people were taking piano lessons, they had to acquire a second piano. She also taught Sunday School and played the organ at church for many years. In 1985, her Danny passed away suddenly, and she became a widow. No one could ever replace him, but she was resilient, and made much of the life she had for the next 34 years - teaching at Grace Christian School and often road-tripping to see kids and grandkids. In her later years she lived in Fargo, North Dakota, near 3 of her daughters, first in an apartment, and then at Elim Care Center. Though it was hard to move to Elim and lose her independence, she decided to make the most of it and began participating in nearly every activity they offered. She loved the staff - nurses, therapists, cleaning people, activities people - and always wanted to hear their stories. Every hospitalization was another opportunity to meet fascinating new people from many different countries and learn about their backgrounds. She also loved all the sons-in-law she acquired as her daughters got married - they were of course better drivers than her girls (she thought) so she was game to go anywhere with them - even fishing, and jet-skiing. She loved trivia games, crossword puzzles and reading, and her mind was irrepressibly curious. She also loved water fights - water balloons, squirt guns, water wars and bumper boats at Cedar Lake Farm. She even started a cake fight once with her grandson Danny. Iris passed away December 20th, 2019, at Elim Care Center, Fargo. We rejoice that her pain is gone, her sight, hearing & mobility is restored, and she is in the presence of her Savior. Iris is survived by siblings, Loretta (Leland) Brewster and Helen (Jim) Wyckoff, and daughters, Brenda (Guillermo) Martinez, Cathy Clark, Rachel (Mark) Heller, Mary (Jon) Hendricks, Helen (Jon) Hovestol, Tammy (Craig) Jasperse and Amy (Stacey) Hoiberg AND 30 grandchildren, 46 great-grandchildren, and 7 great-great-grandchildren. She was preceded in death by her parents, her husband Dan, her siblings Elmer (Shirley) Snyder and Dorothy (Jack) Williams, and sons-in-law, Jose Honrado and Neil Clark, and grandson-in-law Ruben Martinez. She was a great wife, mom, grandma and great-grandma. God was so good to bless us with her presence for 98 years.

Iris was born to Donald and Maggie Snyder in Moundsville, West Virginia. She was the first of five children, followed by Elmer, Dorothy, Loretta and Helen. The family lived in West Virginia, Pennsylvania and Des Moines, Iowa, as Iris was growing... View Obituary & Service Information

The family of Iris Athalie Hanson created this Life Tributes page to make it easy to share your memories.

Iris was born to Donald and Maggie Snyder in Moundsville, West...