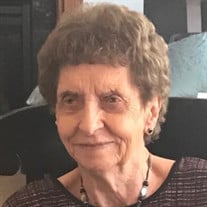 View Irene's graveside service here. https://vimeo.com/588943844 Irene Nordloef, 86, of Kenmare, ND earned her angel wings in the early morning hours of August 16, 2021. She passed away peacefully at the home of her daughter and son-in-law in Fargo, ND. Irene was born on March 25, 1935 in rural Burke County to Wilhelm and Emma Poline. On July 10, 1953 she married Harlan Nordloef. Irene and Harlan moved to Ft. Collins, CO where Harlan was stationed as a corporal in the army. After Harlan completed his service to his country, they moved back to North Dakota where they began a farming and cattle operation near Kenmare. Irene and Harlan worked side by side on their farm for 54 years. After Harlan passed away in May of 2009, Irene retired from farming but continued to oversee the use of her property. She took great pride in making sure that her land was kept productive. Irene was a devoted wife, mother, grandmother, and friend. She will be remembered for her spirited nature, as well as for her abundance of energy and inner strength which she attributed to beginning each day with her bowl of oatmeal. She had a keen sense of humor and a strong will which was still apparent in her final days. Irene is survived by her daughters, Patricia Lund of Williston, ND and Diane (Richard) Greutman of Fargo, ND. Those privileged to call Irene "Grandma" include Megan (Chris) Divyak, Jenna Lund, Brekka (Billy) Sherwood, Michael Lund, and Chelsea (Ryan) Petrich. Great-grandchildren include Taylor, Addison, Cale, Eviana, Cade, Will, Ian and Elliot. She is also survived by numerous nieces and nephews and their families. Irene was preceded in death by her husband, Harlan, parents, sisters and their husbands, Ruth Poline, Evelyn (Charles) Becker and Marie (Chester) Masters, and brothers and their wives, Clifford (Pearl) Hubbell, Wilbur Poline, Oscar (Lila) Poline, Bill (Noreen) Poline, Elmer Poline; mother and father-in-law, Alice and Victor Nordloef, and brother-in-law, Myron Nordloef and his wife, Janene. In lieu of flowers, the family requests that gifts be made in memory of Irene Nordloef to Mayo Clinic Cardiovascular Sciences or Gastrointestinal Sciences www.mayoclinic.org/giving-to-mayo-clinic or the North Dakota Veterans Cemetery. The graveside service will be livestreamed on the funeral home website. A service for Irene will take place at a later date at Bethlehem Lutheran Church in Bowbells, ND.

View Irene's graveside service here. https://vimeo.com/588943844 Irene Nordloef, 86, of Kenmare, ND earned her angel wings in the early morning hours of August 16, 2021. She passed away peacefully at the home of her daughter and son-in-law... View Obituary & Service Information

The family of Irene Margareet Nordloef created this Life Tributes page to make it easy to share your memories.

Send flowers to the Nordloef family.