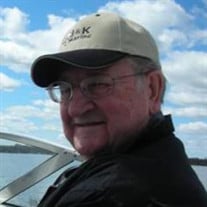 Howard's Graveside Service can be viewed here: https://vimeo.com/462646817 Howard George Zinck, 95, passed peacefully on August 2, 2020 in his home in West Fargo, ND under the care of Sanford Hospice Services and Griswold Home Care. Howard was born to parents Olive and Frederick Zinck on September 28, 1924 in Cleveland, ND. The eldest son of seven siblings, Howard’s strength of character and devotion to family developed at an early age when he was sent to work on farms to help support his family. In April 1943 he was inducted into the Army and served as a heavy truck driver and mechanic during World War II. He transported people, heavy machinery, weapons, and ballistics while navigating the narrow passages throughout Europe. He was honorably discharged in December 1945. After serving his country, Howard returned home to continue his education in Jamestown, ND where he met and married Frances McCommon on November 28, 1947. He was a devoted and loving husband for over 60 years and a loving and generous father to their four children. They spent nearly all their married life in Fargo, ND where Howard’s devotion and commitment to family extended to his community. He was an active member of the First Presbyterian Church, American Legion, Sertoma Club, YMCA, Elks Club, and more. He taught Sunday School, expertly flipped buckwheat pancakes at fundraisers, and was a mentor to his son and his peers through the YMCA Indian Guide program and his service on the Board of the YMCA Camp Cormorant. For most of his adult life, Howard worked in sales and management for Great West Life Insurance. He achieved the designation of Chartered Life Underwriter and was a top-producer in his company receiving multiple sales awards. He served his clients into his 80s retiring shortly after his wife Fran’s passing. His personal activities and hobbies included travel and Couples Bridge with Fran, boating, fishing, hunting, handball and paddle ball, carpentry and construction – which resulted in numerous home improvement projects. Howard is survived by his children Denice Rich of Manhattan, NY, Daniel (Stephanie) Zinck of West Fargo, ND; grandchildren Chad (Lisa) Olson, Kyle (Kellyn) Zinck, Alison (Adam) Schlecht, Zachary Rich, Jasmine Swantek, Broderick Swantek, Garrett Swantek; great-grandchildren, Haley Zinck, Leah Schlect, and Brady Schlect. He was preceded in death by his wife Frances Zinck; daughters Charmelle Olson and Barbara Swantek; parents Olive (Anton) Sazama, Frederick Zinck, and six brothers and sisters. The family extends their sincere gratitude for the expert and compassionate care provided by Sanford Hospice Services and Griswold home care. A graveside service will be held at 11am, Monday, September 28 at the Old Riverside Mausoleum, Riverside Cemetery, Fargo, ND. The service will be available to view via livestream at www.hansonrunsvold.com. In lieu of flowers, the family requests a memorial donation be made to the Paralyzed Veterans of America www.PVA.org or 800-555-9140.

The family of Howard George Zinck created this Life Tributes page to make it easy to share your memories.

Send flowers to the Zinck family.