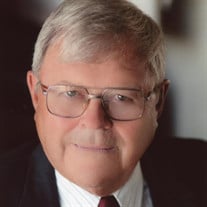 Howard Nieman Vegoe, 84, of Fargo, passed away and entered eternal life on December 7, 2020 in Sanford Medical Center, with his family by his side. Howard was the first of four sons born to Howard and Dorothy (Nieman) Vegoe in Glenwood, MN on June 6, 1936. He grew up working in his parents’ Our Own Hardware store. He graduated from Glenwood High School in 1954. Howard attended the School of Business Administration at the University of Minnesota, Minneapolis, receiving his degree in 1958. He often talked about his campus jobs at the Union. He held a life-long loyalty and pride in the Gophers. In January 1959, Howard was appointed as a commissioned officer in the Army. After completing officer training in Fort Sam Houston, TX, he served as a platoon leader in the 7th Medical Battalion Infantry Division in Korea and later in Fort Lewis, WA. In April 1962, he was honorably discharged. Howard married Roberta Jane Albertsen at Pelican Lake Lutheran Church, Ashby, MN on June 23, 1963. After they moved to Fargo, Howard and Roberta were blessed with the birth of their daughter, Karlyn, and their son, Michael. In 1962, Howard began his long career in the insurance industry at the Hartford Insurance Company in Minneapolis. Later he was transferred to Duluth and Fargo. In 1968, Howard began his 30-year career as an insurance agent with Warner and Company Insurance in Fargo. Over the years he made many lasting relationships with his colleagues and customers, always working with integrity and care. He especially enjoyed mentoring his younger colleagues as they started in the business. He retired as a Vice President in 1998. The greatest love of Howard’s life was his family. He treasured spending time with his family at the lake cabin in Park Rapids, MN and making many memories. He loved watching the peaceful sunsets and all the grandchildren’s water activities. Each one of his five grandchildren was his favorite. Howard loved sports, particularly golf. He looked forward to every nice day when he could go to the golf course, including Thursday outings with his friends. He played basketball nearly every lunch hour at the YMCA. He also made many trips to the Twin Cities to watch Gopher and Viking games, and countless games, concerts and activities for his grandchildren. Howard embraced each day to the fullest with an unfailing faith and positive attitude. He was a long-time member of Olivet Lutheran Church, at one time serving on church council and other roles. Many friendships were made over a cup of coffee. Throughout his life, Howard was a dedicated volunteer. He served on the Fraser Ltd. Board of Directors for 47 years and served as President for several years. He was very active over the years in Masons, serving as Master, and Scottish Rite, serving on the board of the Scottish Rite Language Center. He also was a member of the Lake Agassiz Kiwanis Club for over 50 years, helping where needed and enjoying the weekly meetings with his friends. Howard is survived by his loving wife of 57 years, Roberta; his children, Karlyn (Jeff) Boraas of Apple Valley, MN and Michael (Amanda) Vegoe of Apple Valley, MN; grandchildren, Grant, Jarett and Dane Boraas and Audrey and Mason Vegoe; brothers, Richard (Judy) Vegoe, Thomas (Paulette) Vegoe and many special nieces and nephews. He was preceded in death by his parents, Howard and Dorothy Vegoe; brother James Vegoe and many aunts, uncles and cousins. A private family service was held on December 13 at Hanson-Runsvold with Pastor Kris Gorden officiating. There will be a service celebrating Howard’s life at Olivet Lutheran Church this summer when we can gather. Memorials are preferred to Olivet Lutheran Church Foundation or Radio Fund, Scottish Rite Language Center or Fraser Ltd. Howard was so loved and will be forever remembered.

Howard Nieman Vegoe, 84, of Fargo, passed away and entered eternal life on December 7, 2020 in Sanford Medical Center, with his family by his side. Howard was the first of four sons born to Howard and Dorothy (Nieman) Vegoe in Glenwood, MN... View Obituary & Service Information

The family of Howard Nieman Vegoe created this Life Tributes page to make it easy to share your memories.

Howard Nieman Vegoe, 84, of Fargo, passed away and entered eternal...

Send flowers to the Vegoe family.