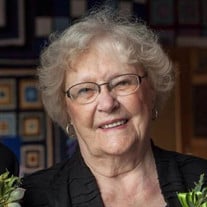 Hope's Memorial Service can be viewed here: https://vimeo.com/691149128 Hope's tribute video can be viewed here. https://www.tributeslides.com/tributes/show/NYBGRXX9JT64J7YZ Hope Elaine (Posey) Hektner, 98, of Fargo, passed away peacefully in her sleep on March 14, 2022. Hope was born on November 13, 1923, in Courtenay, ND. She grew up in Glenfield, ND, on the farm with her Grandma and Grandpa Posey, and Aunt Lottie Posey. She graduated from Glenfield High School at 16 and was Salutatorian of her class. She moved to Fargo and attended Dakota Business College. After finishing school, she began working at Hektner Insurance. At work, she met Alfred Hektner, and they were married at Pontoppidan Lutheran Church in Fargo on November 14, 1942. Alfred served in the US Army during World War II, and Hope went with him to St. Louis, MO, when he was stationed there. When he was overseas, her mother and father-in-law, Gus and Margarett Hektner made sure she was okay. They did so much for her and loved her like a daughter. When he returned, their first daughter, Vicki, was born. Two years later, Candice was born. In 1951 they built a new home and welcomed Curtis to the family. Daughter Marianne's arrival three years later completed Hope's family. Hope and Al were active members of Pontoppidan Lutheran Church. WELCA and her Circle were very important to her all her life. Hope was a homemaker, mother, and wife, and she was the best mom to us! She was President of the Washington PTA and volunteered there often. She was President of Pontoppidan's women's group in her younger years and was chairwoman of the Scandinavian Coffee for many years at Pontoppidan. It was a favorite annual event. Hope was an excellent bowler. At one time, she bowled in 3 leagues a week. She was inducted into the Fargo-Moorhead Women Bowlers Hall of Fame and the North Dakota Women Bowlers Hall of Fame. For 25 years, she participated in the USBC National Women's Bowling Tournament, which was held in many different cities around the country and was based in Reno, NV. In the first years, she went with her Fargo bowling team, and later, her daughters and some granddaughters joined her to bowl in the tournament. When she received her 25-year attendance award, she had her three daughters and three granddaughters, and a best friend bowling with her that year. She was a member of the Fine Arts Bowling League in Fargo for many years. After Al's death in 2008, Hope continued to live in the family home in Fargo until her illness in January. She was remarkable in being able to recall things with great accuracy. Her mind was always sharp. She did crossword puzzles daily and adapted well to new technology. She enjoyed Facebook. She was always a pleasant and loving person who lived God's "commandment to love one another." Her favorite place for lunch was The Fryn' Pan in Fargo. She would go there once or twice a week after she lost Al. She leaves behind her children, Vicki (Charles) Hartz, Candice Hektner, Curtis (Deb) Hektner, and Marianne (Jim) Johnson; grandchildren Brian (Michael Boe) Hartz, Jennifer (Cory) Rubin, Nicole (Mehdi Noori) Hektner, Kristen (Mike) Walpole, Joshua (Georgette) Johnson, Lateesha (Tim) Velzy, Jessica Johnson and Brittany (Nick Berendt) Hektner; great-grandchildren, Lucy Rubin, Maggie Rubin, Spencer Koenig, Gabriel Adabunu, Gus Walpole, Charlie Walpole, and Logan Velzy; sister Delores (John) Meier and many nieces and nephews; special friends, Paul and Tanya Light, Alex, Arden, and Emily, Lorraine Zehren, and Sonya Stockman. Hope was preceded in death by her loving husband, Al; her mother, Byrd Jacobson; sister, Jean Johnson; brother, Clayton Jacobson; sister, Polly Pederson; brother, Richard Jacobson, and aunt Lottie Posey. In lieu of flowers, her family asks donations go to Pontoppidan Lutheran Church, the Great Plains Food Bank, or to your choice of charity. A Celebration of Hope's life will be held on Saturday, April 2, 2022, at 2:00 pm at Pontoppidan Lutheran Church, with a visitation at 1:00 pm before the service. Hope's service will be livestreamed and can be viewed on the Hanson-Runsvold website. Burial will be at Sunset Memorial Gardens in Fargo.

The family of Hope Elaine Hektner created this Life Tributes page to make it easy to share your memories.

Send flowers to the Hektner family.