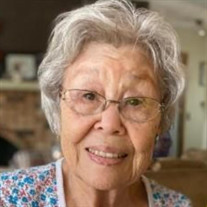 Hisako's Visitation can be viewed here: https://vimeo.com/489555110 Hisako's Funeral Service can be viewed here: https://vimeo.com/489556947 Hisako's Video Tribute can be viewed here: https://www.tributeslides.com/tributes/show/LH8ZHBBC89ZLS5Q5 Hisako Okada Williams Duncan, loving mother and grandmother passed away on December 5, 2020, at the age of 91 in her home in Fargo. She was born August 9, 1929 to Tadoyoshi and Hana Okada in Fukaya, Saitama, Japan. She married Russell Howard Williams on November 3, 1951 at the Japanese Embassy in Japan. She immigrated to the United States in 1954 and became a U.S. citizen in 1964. Hisako and Russell made their home in the Fargo area where they raised four children. Although she was employed outside the home, her true calling was providing a happy and safe home for her family. After the death of her husband in 1964, she decided to remain in the United States to offer her children the best opportunity for success. Hisako had tremendous barriers to overcome over the next decade. Her strength, perseverance, and love of family helped create her new home. She then married James R. Duncan on April 5, 1980 in Fargo in where they resided together until his death in 2002. They enjoyed travel and had many happy times at their lake cabin on Bijou lake near Lake Park, MN. Hisako loved family, especially her grandchildren. She loved spending time with them and attending their events. Family gathering for the holidays were favorites for both Hisako and Jim. She is survived by her children: Richard (Joy) Williams, James (Patti Sele) Williams, Herbert (Lisa Montalongo) Williams, and Kay (Paul) Hannaher. Stepsons Dan (Jacki) Duncan, Jay (Mer) Duncan, Dean (Brenda) Duncan and Paul (Carol) Duncan. Her immediate family also includes 8 grandchildren and 10 great-grandchildren. She is also survived by her brother, Haruhisa, and sister, Fumi, and many nieces and nephews who all reside in Japan. Over the years, Hisako was a mentor to several Japanese students, attending school in F-M area. To this day, these students call her “Grandma”, as she provided them love and support while they were away from home. Hisako was also blessed to have another “family” in the area, consisting of other Japanese women, in Fargo. They provided each other with additional love, support and connection to their common roots. There was also her special family the “Asian Golden Girls”, Masayo Sollid and Chiyoko Decausmeaker. Visitation will be Thursday, December 10, from 5:00 – 7:00 PM at Hanson-Runsvold Funeral Home. A private funeral service will be held on Friday, December 11, at 10:00 AM. Both the visitation and funeral will be live streamed and available to view through the Hanson-Runsvold Funeral Home Website. Burial will be in Riverside Cemetery, Moorhead, MN.

The family of Hisako Okada Duncan created this Life Tributes page to make it easy to share your memories.

Send flowers to the Duncan family.