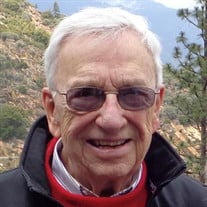 Hank's service can be viewed here: https://vimeo.com/685226974 View Hank Grefe's Tribute Video Here: https://www.tributeslides.com/tributes/show/ZZNJS72P629MCY3T Henry “Hank” Grefe was born on May 4, 1917, in Omaha Nebraska to Paul and Anna (Wandel) Grefe. He married Virginia “Billie” (Ruf) Grefe in December of 1940. They were married for 79 years. They moved from Omaha Nebraska to Fargo, ND in 1953. Hank served our country in World War II as an Army Communications Captain in the Caribbean and South America. He used his knowledge of the German language to monitor German shipping. Following his time in the army he worked as a District Manager for Northwestern Bell Telephone Company until his retirement in 1979. Upon his retirement he bought a “fixer-upper” cabin on Turtle Lake, Hawley MN. Many summer days were spent making cabin improvements, fishing, and hosting, along with his wife, their friends and family. The lake cabin continues to be a favorite summer spot for his family. Hank loved sports of any kind. As a young man he played semi-pro basketball. He was an active member of the Fargo Country Club and was still golfing and enjoying his foursome into his 100’s. You could also find him at many NDSU Bison sporting events. He attended the Team-Makers luncheons and held season tickets to the basketball and football games for decades. When he was unable to attend, he continued to watch the games on television (he watched every football game in 2021!). He loved being at and hearing about his grandchildren and great-grandchildren’s sporting and musical events. Hank died peacefully at Bethany on the Lake Nursing home, Alexandria, MN at the age of 104. He is survived by his daughter Jan (Steven) Ferguson of Alexandria, MN, grandchildren Chad (Kristi) Ferguson of Alexandria MN, and their children Michael, Kebyn, Daniel, Tyler, Megan (Tony Lenz), Eddie, Marcella, Brianna, and Ava; Todd (Molly) Ferguson of Moorhead, MN, and their children Lucia, Clare, Kilian, Therese, Cormac, and Finnian; Scott (Angela) Ferguson of Cary, NC, and their children Elle Louise and Otto and his nieces and nephews. He was preceded in death by his parents, siblings, his wife, Billie Grefe, a daughter, Gay Grefe and an infant son. He will be remembered for his generosity in helping others in need, his quick wit and steady supply of jokes, his frequent conversations with anyone who was around as though he had known them for years, always leaving them with a smile, his abundant care and support for his grandchildren and great-grandchildren and his humble persistent faith in the Lord. He will be dearly missed by his family and his many friends. In lieu of flowers and in keeping with Hank’s strong faith, memorials may be given to Olivet Lutheran Church, Fargo ND, Living Word Lutheran Church, Alexandria MN, or the church of your choice.

The family of Henry "Hank" Carl Grefe created this Life Tributes page to make it easy to share your memories.

Send flowers to the Grefe family.