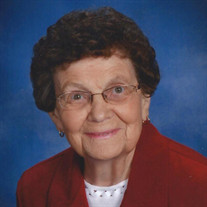 Harriet June Markos, 93, died Saturday, April 18, 2020 at Bethany Rehab in Fargo. She was born June 25th, 1926 in Kindred, the fourth daughter of Elmer and Lucy (Papke) Giddings. Harriet grew up on her parents farm southwest of Horace, ND with her three sisters and one brother. She attended a one room school house near home, starting at age 6 in the second grade. Her family was one of the few English/German families in the area and were outsiders in a predominantly Norwegian area. She graduated, as Valedictorian, after skipping two grades, from Kindred High School in 1942. She was awarded a scholarship to Jamestown College but her family did not allow her to attend because she was only 16. She later attended Business College in Fargo. She married Lynn Veikley, September 8, 1946, in Fargo. They had three children Karen, Kathy and Gary, and first lived in north Fargo and rural Moorhead. Many lifelong friendships were made there. Harriet truly enjoyed finding and keeping good friends throughout her life. In 1956 they purchased a farm east of Shelly MN. In addition to being a loving mother, Harriet did a lot of field work on the farm. They tried to make farming profitable until 1961 when they moved to south Fargo. There she had jobs as a secretary at Oak Manor and Bethlehem Church in Fargo. Their love for the lakes grew during this time from day tips to various lakes to buying a cottage on Pelican Lake. That cottage was the place where friends and relatives gathered and lots of memories were made. When they started Fargo’s Finest Auto Body, Harriet took on the jobs of office manager, bookkeeper, parts runner and everything-else-that-needed-to-be-done. As the business took off they never forgot their love of the lake and were able to build a home on Dead Lake, then moved to West McDonald and finally Big McDonald lake. After the business was sold they traveled to Hawaii and wintered in Bonita Springs, FL. Lynn preceded her in death on March 15, 1989. Harriet had so many friends that wintered in Arizona that she decided to sell the Florida home and then wintered in Apache Junction, Arizona. She met Chris Markos in Apache Junction. Chris was immediately taken with Harriet because she wasn’t trying to find a husband, unlike most of the other single female snowbirds. She married Chris Markos on February 5, 1994 in Apache Junction, Arizona. She really enjoyed her life with Chris, even learning new activities like golf and hiking. They spent the winter in Arizona with their North Dakota and Canadian friends, spring and fall at Chris’s home in Utah, and summers at the lake in Minnesota. Chris developed cancer and Harriet stayed by his bedside for those many months until he passed away January 1, 2001. His death left a hole that was difficult to fill. Harriet continued commuting between Arizona and Minnesota. Harriet decided to stay in Fargo year round in 2002 and bought a twin home in south Fargo. She was always active in the Lutheran church and was currently a member of Hope Lutheran Church in south Fargo. She traveled to Germany and Israel with Hope and volunteered in the office and made quilts with their quilting group. She also knit countless infant caps for Sanford and volunteered for Prairie Public TV. She enjoyed time with friends at the Senior Center, helping to organize regular bus trips in the area as well as playing cards. She was a prolific afghan knitter and quilt maker. Examples of these are spread throughout the family. She moved in 2010 to independent living and then assisted living at Sheyenne Crossings in West Fargo where her sister Dorothy lived. The sisters now had more time to do puzzles and play games together. Later, as more care was needed she moved to Edgewood Vista in south Fargo. The family sincerely thanks Edgewood Vista for their compassionate care during her final years. She was preceded in death by her parents and three sisters. Surviving are her brother, Al (Marilyn) Giddings, Cedar Crest, NM, two daughters and one son, Karen (Llewellyn) Rauser, Caledonia ND; Kathy (Larry) Morris, Fargo; Gary (Patty), Inver Grove Heights, MN; two step-sons, Steven C. Markos, Layton, UT; Russell G. (Joy) Markos, Clinton, UT; one step-daughter, DiAnn (Stan) Schaub, Clinton, UT; 6 grand children, 14 great grand children, and many step grand and great grand children. A private service will be held at 2pm on Thursday, April 23, 2020 and will be streamed on Hanson-Runsvold's website. A Celebration of her life will be held at a future date when it is safe for all to gather. In lieu of flowers, mom would appreciate any memorials be sent to Hope Lutheran or the Alzheimer’s Association. Internment will be beside Lynn, at Riverside Cemetery, Fargo.

Harriet June Markos, 93, died Saturday, April 18, 2020 at Bethany Rehab in Fargo. She was born June 25th, 1926 in Kindred, the fourth daughter of Elmer and Lucy (Papke) Giddings. Harriet grew up on her parents farm southwest of Horace, ND with... View Obituary & Service Information

The family of Harriet Markos created this Life Tributes page to make it easy to share your memories.

Send flowers to the Markos family.