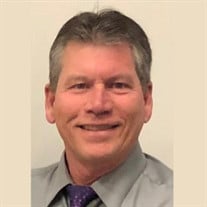 Harold's Memorial Service will be live streamed here at 11AM, Wednesday January 6, 2021. https://boxcast.tv/view/funeral-for-harold-schill-fbbwlrtacxinlbpz25gh Harold “Howie” Jerome Schill Jr died at Sanford Medical Center on December 25th, 2020. Born to Christine (Schneider) and Harold Schill Sr; on October 6th, 1965, Howie came into this world busy, and he never wanted to stop. Howie met his wife, Juanita (Hoherz), in Wahpeton, ND. They married in 1988 and moved to Fargo to start their life together. Within six years, they had three kids, and Howie was thriving as General Manager at Perkins. In 1990, they suffered the tragic loss of their firstborn, Harold “Howie J” Jerome Schill III. Pushing through by the grace of God, they had two more sons, and their little slice of heaven was complete. His kids grew up, and they were his life. Whether it was adjusting shocks on the race car or doing flash photography in a theatre, he wanted nothing more than to be involved with everything his kids enjoyed, though this proved to be challenging as his kids were polar opposites. By the end of 2018, his children found love, and he was able to discover the joy of being a grandfather. During this time, he and his wife started their new slice of heaven in Hawley, MN. They owned a business, Mid Ag Dispatch, and were blessed to hire their children to work with them and spend more time with them. He will always be remembered for his crooked smirk, his beautiful blue eyes, his willingness to always help his kids, and complaining to his wife because he was bored on a Sunday afternoon. He was full of jokes, full of love, and will be greatly missed by those who love him. He was preceded in death by Harold “Howie J” Jerome Schill III, son; Kelly Fischer (Schill), sister; Christine Roberts (Schneider); mother. Mark and Whinnie Schneider, grandparents; and Alexander Schill, grandfather. He was survived by his wife, Juanita Schill; two sons, Cody (Nikos Manousakis) Schill and Cole (Erica) Schill with two grandchildren Cayson Jerome and Ellie Louise Schill; adopted daughter, Jenny Scott; Meemah, Jodi Kugler; father, Harold Schill Sr, brother, Troy (Dana) Schill; sister, Jacklyn Schill; and grandmother, Mary Bolte; and all nieces, nephews, cousins, aunts, and uncles. Honorary Pall bearers are Kyle Holm, Dave “Big D” Buringrud, Todd Truedson, Ryan Gustafson, Jeff “Hoppy” Hapala, Ross Renecker, Dan Dowling. A private Funeral service will be held at Hope Lutheran Church South Campus, 3636 25th St S, Fargo, ND. Howie's Tribute Video can be viewed and copies ordered here: https://www.tributeslides.com/tributes/show/LK2H4WHK845KWFTM

The family of Harold Jerome Schill Jr. created this Life Tributes page to make it easy to share your memories.

Harold&#39;s Memorial Service will be live streamed here at 11AM,...

Send flowers to the Schill family.