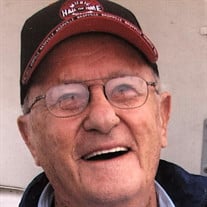 Harold Herbert Mueller, 88, passed away on May 19, 2020, from Alzheimer’s disease at Eventide nursing home in Moorhead, Minn. Harold was born at his parents’ home on June 14, 1931 in Goodrich, North Dakota - the fourth child of Joseph and Sophie Mueller. He was bilingual since his parents and the community of Goodrich spoke mostly German in those days. He attended high school in Goodrich where he participated in sports and sang in a quartet with his buddies. He enjoyed many shenanigans in Goodrich with his best friend Dick Doering and wrote about those stories in a short autobiography called, “Growing Up in a Small Town-It Was the Best Time of My Life.” Harold enlisted in the Navy and was injured on the USS Orion during a training exercise off the coast of Virginia. After a medical discharge from the Navy, Harold attended Interstate Business College in Fargo. In the fall of 1954, while standing in the hallway at college, he spotted a cute gal wearing bobby socks and sneakers. He leaned over to his buddy with a prediction: “I’m going to marry that girl.” And so he did. On April 30, 1955, Harold Mueller married Shirley Tommerdahl, a union that spanned 65 years and blessed them with five children. Harold worked alongside his father in the farm implement business and farmed in Goodrich and Ada, Minn. Later in life, he was a Veterans Service Coordinator for the Disabled American Veterans office in Fargo. Harold had a passion for flying his Cessna airplane and particularly enjoyed “buzzing” his friends and neighbors. He and Shirley loved traveling and camping and, much to the dismay of their grandchildren, could drive in to a gas station, talk to a stranger and make instant friends. During their golden years together, Harold and Shirley spent several summers in Medora both working and meeting new friends from around the world. Harold loved to jitter-bug, enjoyed wood carving, fishing, checkers, whist, and always appreciated a good joke. When cooking for the holidays, he would prepare Food Network-caliber turkey and dressing. Harold will be lovingly remembered by his family for reciting a German prayer, taught to him by his parents, at all family dinners. He was kind, devoted to his parents, his wife, children and grandchildren, and had a tender heart. He is survived by his wife, Shirley; a daughter Wendy Pederson, West Jordan, Utah; a daughter Barbara (Dean) Baum, Queen Creek, Ariz.; a son Jeffrey (Charley) Mueller, Troy, Ill; a son James (Rick) Mueller; and a daughter Kari (James) Woodmansee, Grand Forks, N.D.; seven grandchildren, Melissa (Drew) DeMarco, Andrew Pederson, Alexander (Brittany) Pederson all Salt Lake City, Utah; Brandyn Mueller, Charlotte, N.C.; Briana Mueller, Troy, Ill.; Molly (Brian Principato) Spaeth, Washington, D. C.; and Maxwell (Mariya Ivanyshyn) Spaeth, New York City. He is also survived by his sister Dolly (Jerry) Just, Moorhead, Minn., and two step grandsons, Ryan (Amy) Baum, Bettendorf, Iowa, and Bradley (Erin) Baum, Madison, Wisc.; and three step great grandchildren. He was preceded in death by his son-in-law Michael Pederson; brother-in-law Dale Tommerdahl; his parents; two brothers, Richard and Ruprecht (Rip) Mueller; and a sister, Kay York. Harold's Tribute Video can be viewed here: https://www.tributeslides.com/tributes/show/876JGX3RLJ5X66YH Due to the COVID pandemic, a private family service will be held on Friday, May 22 with burial to follow at a later date. Arrangements have been entrusted to Hanson-Runsvold Funeral home, Fargo, N.D. In lieu of flowers, donations can be made to the Alzheimer’s Association- 2631 12th Ave S, Fargo, ND 58103.

The family of Harold Mueller created this Life Tributes page to make it easy to share your memories.

Send flowers to the Mueller family.