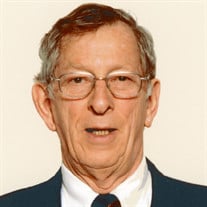 Gurnee K. Bridgman was born in Chicago, IL on March 5, 1931. He died in Fargo, ND following may years of retirement on April 17, 2019. He completed his el-hi educational years there and remained at his family's home until leaving for college. He attended Ripon College (Ripon, Wisconsin) for one year and subsequently transferred to the University of Michigan where he completed an undergraduate degree in Psychology in 1954. Gurnee remained an ardent fan of U of Michigan for his entire life and often complained the hardest thing to do was sell his season tickets in Ann Arbor. At the time he lived in Flint, Michigan and so was able along with his first wife, Virginia, to attend all of the fall games. She also earned a Michigan Diploma, being in the first graduating class of U of M-Flint. While she was completing her education, Gurnee worked for Procter & Gamble in both Michigan and at the P&G Cincinnati HQ for several years. Leaving P&G, he and Virginia moved to New Orleans, LA, where he worked in sales and marketing for Blue Plate Foods. Later, he left Blue Plate and moved to the Madison, WI area, where he worked at Oscar Mayer, initially in the grocery area, but later on the foodservice area. While there, he was in charge of the Little Oscar & his mammoth Wienermobile for many years. Gurnee retired in the early 90's and then moved to his lake home north of Bemidji. While there, he attended Bemidji State U and earned a master's degree that was peer reviewed and published. His emphasis area was biology, ornithology and geology. At BSU, he became active in on-stage theatre and appeared in many shows of all types, ranging from popular tunes to opera. This interest transferred to the FMCT in Fargo, where he also appeased in many shows (mostly Silver Follies). He was later awarded a FMCT Emmy for his greatest non-speaking role. Gurnee was very active in Freemasonry and the Shrine while residing in the Fargo area. He served the fraternity as Master in different lodges, one in Wisconsin, and two in Fargo. He was coronated a 33rd Degree Mason in 1975. Along with his first wife, Virginia, they served as worthy Matron/Patron. He also served as President of the local Scottish Rite Children's Language Disorder Center in his later years. Amateur 'ham' radio played an important aspect in Gurnee's life. He held, as a cherished memory, his father's call from the early 20's, W9NT. He contacted other hams throughout the world over the years and earned many operating awards within this hobby, which played a major interest during his later years of life. Gurnee married his first wife, Virginia in 1955. They remained a devoted couple in love together for almost 50 years. Virginia preceded him in death in 2003. Later on, he married Mary Leigh, and she too preceded him in death in 2009. Gurnee is survived by his daughter, Valerie Eisenzimmer and one granddaughter, Johnna Eisenzimmer. He was preceded in death by his parents, Myrtle and Frank Bridgman, and a brother, King. Gurnee wanted to make sure his obit said, "RIP my friends and Masonic Brothers". A Masonic Service will be held at 1:30 PM on Thursday, April 25 at First Congregational United Church of Christ with a Memorial Service following at 2:00PM. There will be a visitation from 1:00-2:00 PM. Memories and condolences may be shared by visiting www.hansonrunsvold.com. Arrangements by Hanson-Runsvold Funeral Home – Fargo, ND

Gurnee K. Bridgman was born in Chicago, IL on March 5, 1931. He died in Fargo, ND following may years of retirement on April 17, 2019. He completed his el-hi educational years there and remained at his family's home until leaving for college.... View Obituary & Service Information

The family of Gurnee K. Bridgman created this Life Tributes page to make it easy to share your memories.

Send flowers to the Bridgman family.