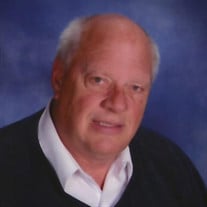 The service will be available to view via livestream at https://vimeo.com/502702567 Greg Kaeding passed away on January 14, 2021 in his home surrounded by his family after a battle with lung cancer. He was born on November 10, 1949 in Grand Forks, ND to Mel and June Kaeding. He graduated from Fargo North High School in 1967 and NDSCS in Wahpeton, ND In 1969. Greg married Joanne Lahren in 1972. They have 2 children Tara Thorsgard and Matthew Kaeding. He worked in the commercial finance business in various positions for 40 years. He was involved in Slow Pitch softball in Fargo as a player for almost 40 years. He was a significant part of the state slow pitch softball program for almost 30 years. During this period Greg served as the State Secretary/Treasurer, Executive board member and a member of the Hall of Fame Committee since 1993. Over the last 30 years Greg was a part of almost every committee on the state level to provide guidance for the softball program in North Dakota. Greg was also a key person and leader of the Fargo Slow Pitch Softball Association for almost 30 years. Over this he was active in running leagues, invitational and state tournaments. Greg was inducted into the North Dakota Slow pitch Softball Hall of Fame in 2018 and recently received the USA Softball of North Dakota Lifetime Achievement Award. Greg also enjoyed hunting, fishing, and spending time with his family at his camper at the lake. Greg is survived by his wife, Joanne, daughter Tara Thorsgard (Erik), Northwood, ND, son Matthew Kaeding, and seven grandchildren, Avery, Emma, Ander, Maddie and Syver Thorsgard, Theresa Hosford and Emily Gress, brother Kevin (Leigh) Kaeding, Bismarck, ND, sister Kristy (Rick) Wager, Hendrum, MN, and numerous nieces and nephews. He was preceded in death by his parents Mel and June Kaeding.

The service will be available to view via livestream at https://vimeo.com/502702567 Greg Kaeding passed away on January 14, 2021 in his home surrounded by his family after a battle with lung cancer. He was born on November 10, 1949 in Grand... View Obituary & Service Information

The family of Greg Dorne Kaeding created this Life Tributes page to make it easy to share your memories.

The service will be available to view via livestream at https://vimeo.com/502702567

Send flowers to the Kaeding family.