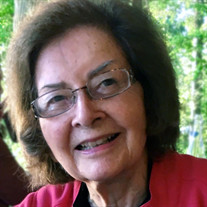 Grace Ann Mathew Haakenstad, a woman of many talents and accomplishments, passed away on Wednesday, January 22, 2020, at the age of 91. Grace was born in 1928 to Ralph and Cecilia Mathew, who farmed outside of Barnesville, MN. She attended school in Barnesville and at NDAC, where she met Dale Haakenstad. Dale, an actuarial student, was impressed with the pretty girl who also just happened to know what the job of an actuary involved. Grace and Dale enjoyed ski outings, and Grace even won a medal in downhill skiing. Following marriage, they relocated to Camp Rucker, Alabama, where Dale was stationed in the Army during the Korean Conflict. Upon his discharge, they returned to Fargo. While raising three children, Grace completed her BA in English at NDSU and was active in volunteer work, Chapter AE of PEO, Junior League and church activities. Her strong writing skills led to her editing the Sheaf publication for the Episcopal Diocese of North Dakota as well as being historian and newsletter editor for various volunteer groups. Grace was also an avid Bridge player. She was very fond of their winter home in Scottsdale, AZ as well as the Pelican Lake cottage, which they owned for nearly 50 years. Grace and Dale traveled extensively and passed their love of travel on to their children and grandchildren. Grace will be remembered for her adventurous spirit, sense of style, love of the arts and the written word, sharp wit and incredible life force. She is survived by her children, Jane, St. Louis Park, MN; Matt (Lisa), Minnetonka, MN; Pete (Wynne), Chanhassen, MN; grandchildren, Caroline Holewa (Guillermo Serrano); Louise Holewa; Mark (Abby) Haakenstad; Anne Haakenstad; Sam and Hayley Haakenstad; sisters Mary (Richard) Wagner; and Sister Martha Mathew, OSF; and many nieces and nephews. A celebration of her life will be held at Gethsemane Cathedral, 3600 25th Street South, Fargo at 11 AM on February 3rd, with a reception following at the Fargo Country Club. Memorials are preferred to Gethsemane Cathedral, the FM Symphony Orchestra, The NDSU Development Foundation, or the Fargo Air Museum.

Grace Ann Mathew Haakenstad, a woman of many talents and accomplishments, passed away on Wednesday, January 22, 2020, at the age of 91. Grace was born in 1928 to Ralph and Cecilia Mathew, who farmed outside of Barnesville, MN. She attended... View Obituary & Service Information

The family of Grace Ann Haakenstad created this Life Tributes page to make it easy to share your memories.

Grace Ann Mathew Haakenstad, a woman of many talents and accomplishments,...

Send flowers to the Haakenstad family.