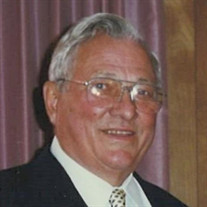 Gordon Floyd Kartenson, age 93, passed away November 22, 2021, in Fargo, ND. Gordon was born on June 19, 1928, in Fargo, ND, to Sam and Gladys (Jefferson) Kartenson. Gordon Graduated from Fargo Central High in 1945, joined the Army, and was stationed in Korea from 1946 to 1947. He graduated from NDAC (NDSU) in 1950 with an Economics degree. Gordon met Beatrice Elaine Jones while at college, and they married on October 14, 1950. He spent summers during his college years working in watchtowers for the forestry service. After college, He started working for New Day Seed and then Standard Oil. He acquired employment in Fargo with Union Storage and Transfer Company, where he worked for 35 years retiring in 1990 as Vice President. Gordon was active in many organizations, including the VFW, American Legion, YMCA, Rotary, Sons of Norway, Elks, Scottish Rite of Freemasonry 32﮿, Icelandic Klub, and was a lifetime member of El Zagal Shrine. He enjoyed being with friends and family, playing golf, bridge, and cribbage. He most enjoyed sailing, whether on Pelican Lake, the Apostle Islands, or with family and friends on his boat, the "Cypriana," in the Virgin Islands. In later years he and Beatrice wintered in Desert Hot Springs, California, and spent summers at the cabin on Pelican Lake. He traveled all over the world, including Iceland, where he had many cousins. Gordon was preceded in death by his father Sam, mother Gladys (Jefferson), wife Beatrice (Jones), son Barry, and son Bruce. Gordon is survived by his daughter Cynthia (Dale) Lura, son Brian (Kathi Hoylo), grandchildren Jeremy, Chad, Sam, and Tor, and great-grandchildren Gillian and Ian. Special thanks to the staff at Touchmark Fargo, where Gordon resided for the last three years. A Celebration of Life will be held on May 20, 2022, from 2 pm to 4 pm at the Sons of Norway Kringen Lodge, 722 2nd Ave N Fargo. Memorials can be made in Gordon's name Plymouth Congregational Church or to the Masonic Lodge Children's Fund.

Gordon Floyd Kartenson, age 93, passed away November 22, 2021, in Fargo, ND. Gordon was born on June 19, 1928, in Fargo, ND, to Sam and Gladys (Jefferson) Kartenson. Gordon Graduated from Fargo Central High in 1945, joined the Army, and was... View Obituary & Service Information

The family of Gordon Floyd Kartenson created this Life Tributes page to make it easy to share your memories.

Send flowers to the Kartenson family.