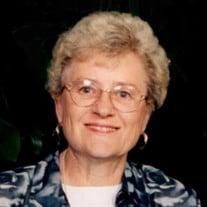 Gloria Johnson, 85, of Fargo, ND, died peacefully on Tuesday, July 30, 2019 at Kinder Care in West Fargo, ND. Gloria Marie (Hoganson) Johnson was born March 10, 1934 in Lisbon, ND to Oscar H. and M. Lucille (Larson) Hoganson. Gloria graduated from Kindred High School in 1951 and she and her family moved to Fargo as she started college at NDSU (1951). Gloria received a scholarship to play saxophone in the NDSU Gold Star Band which she continued throughout her college years. She was a member of Phi Mu Sorority where she met many lifelong friends. She also met her husband, Duane Johnson at NDSU. She graduated with a degree in Home Economics Education (1955) and taught in Buffalo, ND. Duane returned from serving in Korea and they were married June 30, 1957 and Gloria moved to rural Grafton, ND. She taught at Hoople High School until her daughter, Terry, was born in November, 1961. Jerry and Janelle were born exactly three years later in 1964. Gloria taught Sunday School at Grafton Lutheran Church, was a 4H leader for the Countryside Girls of rural Nash. She later directed a public health nutrition program (WIC – Women Infants and Children) in Walsh County. She was a breast cancer survivor and volunteered for the Women’s Way Breast Cancer Screening program. She enjoyed curling, golf, sewing, antiquing, china painting and was a fierce bridge player. She was also an avid sports fan, particularly baseball - following the Twins. Her children recall fondly that she rarely missed a sporting event where they participated. In retirement, she and husband, Duane, spent 18 winters in Florida and two in Arizona. In 2010, Duane and Gloria moved to Fargo, ND when she started experiencing Parkinson’s symptoms. She spent her final years at Kind-er Care Assisted Care, in Fargo. Gloria is survived by her husband, Duane, daughters, Terry (Doug) Hartman, Atlanta, GA; and Janelle (Craig) Howe, Long Beach, CA; and son, Jerry, Washington, DC; and her brother, Harris Hoganson, Bottineau, ND. She is also survived by two grandsons, Phil Hartman (Polly) and Colin Howe; and one granddaughter, Emma Howe. She is also survived by several nieces and nephews and their families. She will be fondly remembered by her family and her many friends. A Memorial Service will be held in Fargo at 5pm on Friday, August 16, 2019 at Hanson-Runsvold Funeral Home. A second Memorial Service will be held in Grafton, ND at 11am on Saturday, August 17, 2019 at Grafton Lutheran Church.

The family of Gloria Marie Johnson created this Life Tributes page to make it easy to share your memories.