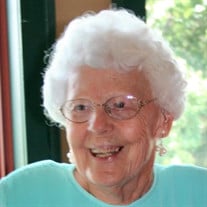 Gladys Irene Kost, age 101, passed away November 17, 2020 at Bethany on 42nd, Fargo, ND. Gladys Irene Stempson was born December 3, 1918 to Harry and Nellie (Nash) Stempson in Baker, MN. She grew up in Baker/Barnesville. On November 17, 1938, she married the love of her life, Ronald L. Kost and together they had three children, Tony, Holly, and Judy. They raised their children in Moorhead, MN. In 1962, Ronald and Gladys moved to a farm in Glyndon, MN. In 1975 Ronald retired from Kost Brothers and they moved to Lake Havasu City, AZ; spending their summers in Minnesota on Blanch Lake. Gladys was an adept duplicate bridge player, enjoyed traveling, playing golf, watching the Minnesota Twins, doing volunteer work, eating any kind of pie, dancing to her favorite song, “Josephine” with Ron, and spending time with family and friends. Gladys was survived by her son Ronald A. Kost (Susan); her two daughters, Judith (Stan) Knecht, and Holly Beattie; brothers-in-law, John Gregory (Dagmar) Kost, and Robert Kost; twelve grandchildren, sixteen great-grandchildren, and four great-great-grandchildren. Gladys loved and dedicated her life to her family; she will be deeply missed by all.

The family of Gladys Kost created this Life Tributes page to make it easy to share your memories.

Send flowers to the Kost family.