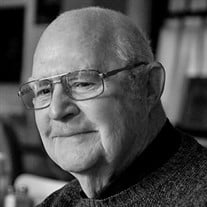 Jerry Richardson, 91, longtime NDSU communications director, died at home, surrounded by his family, on July 27, 2021. Although a long period of gradually advancing dementia had slowed his sharp mind and quick wit, he was still taking joyful bike rides and walks through his Fargo neighborhood until a month before he entered hospice care at home. Jerry was born Jan. 6, 1930, in Huron, S.D., just as the Great Depression was taking hold across the country. His dad, Bert, a railroad man who wrote poetry; his music- and book-loving mother, Frances (Sullivan); and his doting older sisters, Jeanne and Maxine, provided a loving, supportive upbringing despite the hardships of the times. Memorable childhood adventures included a summer in Yellowstone Park where he had the time of his life following his dad on his rounds as a fireguard. Several of Jerry's greatest passions were sparked in college at South Dakota State in Brookings. As a "Printing and Rural Journalism" major, he honed his skills as a letterpress printer, writer, reporter, editor, and photographer. But most important, Jerry met fellow journalist Lou Miller in the offices of the SDSC Jack Rabbit Yearbook, which Jerry edited in 1953. Their 68-year marriage began on the morning after graduation, June 9, 1953. A college ROTC member, Jerry served in the U.S. Army in Korea, arriving just days after hostilities had officially ended. His duties as public relations officer at the Inchon Replacement Depot offered a valuable experience for future employment as well as material for oft-told stories through the years. Back in Brookings, Jerry's communications career expanded to include sports information, and the family expanded to include five children: Stacy, Gordon, Beth, Jay, and Drew. The family moved to Fargo in 1963 when Jerry was hired as an editor and photographer in the NDSU News Bureau. He became Director of Communications and University Relations in 1971. He was enormously proud of the talented folks on his staff and the award-winning publications and multimedia productions they created. The Communications Office also carried out the news, publications, and audio-visual functions in support of the NDSU Alumni Association and Development Foundation. As editor of the popular tabloid publication "Bison Briefs," Jerry received great satisfaction from traveling around the country to interview and write about alumni and their contributions in many fields. He was recognized for his own contributions with awards from national organizations and NDSU, including the Blue Key Doctor of Service Award in 1991. He was often heard to say, "I have the best job in the world!" During the NDSU years and after their retirement in 1993, Jerry and Lou made dozens of trips around the U.S. and overseas, with itineraries often including visits to famous presses (including Gutenberg's!). A not-so-famous South Dakota press provided equipment and name for the Ree Heights Institute Press, founded by Jerry and housed in his basement. There, among numerous broadsides and other hand-typeset, hand-printed ephemera, he produced his 2014 wry photographic memoir, "Not Bad Chicken, and other profound observations famous people have made to Jerry Richardson." His "masterwork" completed, Jerry was happy to donate the contents of his print shop to the NDSU art department, where students use the historic presses, type, type cases, and even pica poles to create fine art pieces. Jerry is survived by his wife, Lou, children Stacy (Henry Blackburn), Gordon (Julie), Beth, Jay (Amy), Drew (Bernie Weitzman), grandsons Bryce Richardson August (Anna), and Colin Sheeley; and great-granddaughter Maeve August. Well wishes would be deeply appreciated from those who have not been able to be fully vaccinated or who are not able to attend. In lieu of flowers, memorials may be directed to The Jerry Richardson Memorial Fund, NDSU Foundation, Box 5144, Fargo, ND 58105, or to www.ndsufoundation.com/jerry-richardson-memorial.

Jerry Richardson, 91, longtime NDSU communications director, died at home, surrounded by his family, on July 27, 2021. Although a long period of gradually advancing dementia had slowed his sharp mind and quick wit, he was still taking joyful... View Obituary & Service Information

The family of Gerald Alan Richardson created this Life Tributes page to make it easy to share your memories.

Send flowers to the Richardson family.