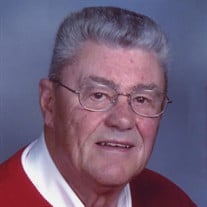 Jerry's Funeral Service can be seen here at 11am, Tuesday, April 13: https://vimeo.com/533634337 Gerald "Jerry" Just, 86, of Moorhead, MN, passed away unexpectedly on Monday, April 5, 2021 at his home. Gerald "Jerry" Just was born March 15, 1935, to Ted and Edna (Kleingartner) Just at Turtle Lake, ND. He was baptized and confirmed in the Lutheran faith. He attended schools in Mercer, ND and Wishek, ND. He graduated from Wishek High School in 1953. He was active in sports in high school and excelled in basketball and track, both in high school and at Jamestown College. Jerry and Darlene "Dolly" Mueller were married January 1, 1956 at Peace Lutheran Church in Goodrich, ND. They had one daughter, LeAnn. Jerry had a twenty-five year career working for Wells Fargo Banks that started in Bismarck. He was transferred to First National Bank in Fargo in 1967 where he held the position of Vice President in charge of the Real Estate Mortgage Department. In 1973, he was transferred to Norwest Bank in Sioux City, Iowa, which was an affiliate of Norwest Bank Corporation (known as Wells Fargo today). There he was named Executive Vice President in charge of Correspondent Banks in Iowa, South Dakota, and Nebraska. During this time, he fulfilled his quest to complete his banking degree at the University of Wisconsin. In 1983, he and Dolly returned to Fargo to pursue other opportunities. Jerry's kind heart and selfless contributions to his family will be greatly missed. He spoke daily of how blessed he was to have his beautiful family, which included two wonderful grandsons who loved their grandpa dearly, along with six great-grandchildren. Their smiles, hugs, and kisses were the center of his attention daily. Jerry is survived by his wife, Dolly; daughter, LeAnn (Bryan) Thoreson, Moorhead, MN; grandsons, Ben (Maggie) Thoreson, Moorhead, MN; Jay (Brittney) Thoreson, Alexandria, MN; great-grandchildren, Beck, Nora, Evie, Kael, Crosby, Macie. He was preceded in death by his parents and his sister and her husband, Donna and Erven Grosz. A private funeral service will be held at 11:00am, Tuesday, April 13, 2021 and will be livestreamed on the funeral home website. Jerry's Tribute Video can be seen and copies ordered here: https://www.tributeslides.com/tributes/show/PT869FS2MCZPJXBF

The family of Gerald "Jerry" Dean Just created this Life Tributes page to make it easy to share your memories.

Send flowers to the Just family.