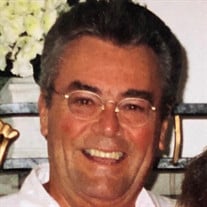 On October 8, 2020, Gerald (Jerry) Farol passed away with his son Scott at his side and surrounded by the love and prayers of many. He leaves behind his beloved wife Patricia (Pat) Farol, with whom he shared nearly 42 years of a rich, happy... View Obituary & Service Information

The family of Gerald "Jerry" Joel Farol created this Life Tributes page to make it easy to share your memories.

Send flowers to the Farol family.