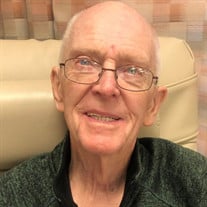 Gerald's service will be streamed at the following link at 11am on Friday, July 10, 2020: https://vimeo.com/436238805 Gerald Paul Harris passed away on April 24, 2020, at his home in Fargo. Gerald was born December 6, 1937 in Aberdeen, SD, the fourth of five children of Vivian and Margaret Harris. Gerald was industrious as a young man, delivering newspapers for the Aberdeen American News in his early years, working at the Anderson Drug and Bates Clothing stores while attending college. He graduated from Aberdeen Central High School in 1956 and joined the Marine Corps, receiving an honorable discharge. Utilizing the GI Bill, he graduated from Northern State College in 1963 with a bachelor’s degree in teaching. He married Ruth McCleerey in 1961 and had two sons. Gerald had his first teaching job in Charlevoix, Michigan and then attended Central Michigan University, achieving a MA in history. He taught high school math in Ellendale, ND and then returned to Northern State to complete a MA in School Administration. He was the high school math teacher and principal in Souris, ND and then assumed the position of superintendent of schools in Kulm, ND. He left education to purchase the Kulm Messenger and LaMoure Chronicle weekly newspapers, later adding the Litchville Bulletin and Enderlin Independent newspapers until his retirement in 2012. Gerald was very active in the community as a city councilman, chamber of commerce and Lion’s club member as well as being involved in many other civic activities. Gerald married Susan Hardtke on January 5, 1996 in LaMoure, ND, where they lived for several years before making their home in Fargo, ND. Gerald enjoyed golf, history, reading, and music of all types and played the piano. Gerald is survived by his wife Susan; sons Allan (Julie) Harris and Richard Harris; grandchildren Torin and Kaija; Susan’s children, Jeffrey (Malissa) Ubben, Scott (Andrea) Ubben and Kristine (John) Keller; grandchildren Trevor, Julia, Emily, Bennett, Caitlin and Audrey; brother Jack Harris and sister Janice Champlin. He was preceded in death by his parents and brothers Russell Harris and Roland Harris. The family would like to express their sincere gratitude to the Fargo VA Healthcare System, especially the Hospice and Palliative Care Team and the Community Living Center, and Hospice of the Red River Valley.

The family of Gerald Paul Harris created this Life Tributes page to make it easy to share your memories.

Gerald&#39;s service will be streamed at the following link at 11am...

Send flowers to the Harris family.