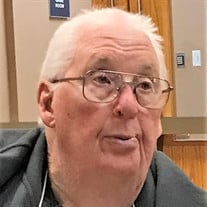 Blessed are the pure in heart for they shall see God. Matthew 5:8 Wednesday, June 3, 1936 was a beautiful day indeed! The sun shone brightly, the birds sang sweetly, and Gary Eldon Shiek was born into this world. He was the 7th (some say cutest) child of Franklin Leroy Shiek and Hattie Rebecca (Boyer) Shiek. The family was living at 20 4th Ave. S. Fargo when baby Gary was born. With eight brothers and sisters to play with, life was anything but boring. Together they enjoyed numerous card games and croquet. They loved to swim in the Red river at Dommers boat house; often catching frogs and snakes to take home to their poor surprised mother! What Gary loved most was spending summers on his sister and brother-in-law’s farm in Hannaford, ND. He considered himself a bit of a farmer for the rest of his life. Gary attended Old Hawthorne Elementary as well as Fargo Central High. While roller skating at Island Park Arena, he met the one true love of his life, Honzee (Betty Ann Gravalin); she was his everything. They married in October 1957 and adopted a daughter, Sharon one month later. Days after their first wedding anniversary a son, Terry was born to them. Six years later a son, Timothy came along. They raised their family in Fargo. Gary began working in the mailroom of the Forum Sept. 14, 1954. Fifty-four years, four months and 7 days later he retired on January 21, 2008. Gary always said he enjoyed working for the Marcil family. After retirement, Gary enjoyed poking around in his flower garden and volunteering at his church. He was the Bingo Man at Villa Maria Nursing Home for 25 years. As his health declined, he enjoyed watching “old Cowboy shows” on TV. He became a resident at Villa Maria in August 2018. He passed away just after midnight April 2, 2019. His Honzee was at his side until the very end. Gary is survived by his wife of 61 years, his everything, Honzee (Betty Ann); one daughter, Sharon Parmer (Douglas Voss); sons, Terry (Carol Holtz), Timothy (red-headed daughter-in-law, Kim Shiek); grandchildren, Tj Shiek, Meredith Parmer, Olivia Parmer, Haley Shiek; one sister, Elizabeth Hanson, Cooperstown, ND; one sister-in-law, Mary Shiek of Florida and numerous nieces and nephews. Gary was preceded in death by his parents, Frank and Hattie; four brothers, Leroy (Red), George, Darold and Robert; three sisters, Marion Pickar, Donna Rand and Gail Larson; brothers-in-law, Earl Hanson and Peter Pickar.

Blessed are the pure in heart for they shall see God. Matthew 5:8 Wednesday, June 3, 1936 was a beautiful day indeed! The sun shone brightly, the birds sang sweetly, and Gary Eldon Shiek was born into this world. He was the 7th (some say... View Obituary & Service Information

The family of Gary Eldon Shiek created this Life Tributes page to make it easy to share your memories.

Blessed are the pure in heart for they shall see God. Matthew...

Send flowers to the Shiek family.