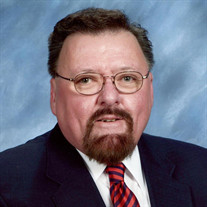 Gary's service will be livestreamed here: https://vimeo.com/444578401 Gary LeRoy Newton was born July 15, 1945, to William (Bill) and Ruth Hughes Newton, at St. John’s Hospital in Fargo, ND. In failing health and under Hospice care, following his wishes, on June 7, 2020 he died at his Fargo home. In August 1945, he was baptized in the Methodist faith at his paternal grandparents’ home in Jamestown, ND; this is where his parents were married and also where his brother and sister were baptized. In 1958, he was confirmed at First United Methodist Church in Fargo, where he stayed a member until his death. In 1963, he graduated from Fargo Central HS, and in 1965 from the ND State School of Science with a degree in Graphic Arts. That year he began work at Fargo Rubber Stamp Works, becoming a partner in 1973. As his health began to weaken, he retired in 1988. From 2002 to 2016, he worked part-time for Leisure Laundry in Fargo, continuing to show his life-long traits of meticulousness and thoughtful service. Gary leaves us with many fond memories, devotion to family, shown notably in his irreplaceable role as genealogist and historian, kindly uncle, loyal friend, unfailing Fargo tour guide to visitors, love of cars, collector, as his means allowed, of charming small art objects, keen practitioner of the art of the phone conversation as his mobility diminished, and much more. He is survived by his nieces and nephews, Todd (Mary) Newton, Blair (Vickie) Newton, Bismarck, John Underwood, Fargo, Denise (Steve) Ishaug, Moorhead, and Deb (Cory) Berg, Detroit, MI. Great-nieces Alyssa Newton, Hannah Berg, Cassie Ishaug, and Abbie Ishaug. Great-nephews Joseph Newton and Hunter Berg. Sister-in-law Mary Jean Newton, Superior WI, Brother-in-law, Bill Underwood, Fargo, former Sister-in-law, Paige Newton, Bismarck, and special friend Sue Braun, Detroit Lakes, MN. He was preceded in death by his parents, brother Dean Newton, sister Sandra Underwood, and nephew Jeff Newton. If you wish to honor Gary’s memory, please consider donations to Hospice of the Red River Valley, New Life Center of Fargo, or Churches United of Fargo-Moorhead. A Celebration of Life will be held at 1pm, Wednesday, August 5 at First United Methodist Church, Fargo. Visitation will be held one hour prior to the service. Due to CDC Covid-19 restrictions, social distancing and masks will be required. Burial will be in Sunset Memorial Gardens, Fargo.

The family of Gary LeRoy Newton created this Life Tributes page to make it easy to share your memories.

Send flowers to the Newton family.