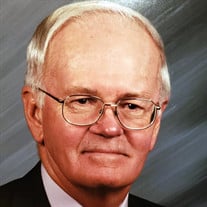 Gary's service will be livestreamed here: https://vimeo.com/489963407 Harold Gary Annear, age 87 of Fargo, ND, passed away peacefully at home on December 9, 2020, surrounded by his family. Gary was born May 27, 1933, in a maternity ward in Belfield, ND, to Ralph and Marjorie (Cooke). He lived with his parents 35 miles North of Medora, ND, until age 5 when he moved to Medora while his father worked for the Billings County Highway Dept. and his mother was a secretary for Billings County. While living in Medora, his friend and Gary decided to steal a pickup truck at the age of 5; one steered while the other pushed the gas pedals heading towards the train depot and they got the pickup stuck in the mud. His mother called the sheriff and had him arrested and put in jail for one hour. After that experience, he decided to disperse justice rather than receive it. In first grade, he moved to Dickinson, ND. At the young age of 9, his father accepted a position with the CAA (now known as FAA), and he traveled a lot, so Gary had to be the man of the house until after high school. Gary played basketball for the Dickinson Midgets, taking 2nd place his senior year. He was known to the announcers as Mad Annear because he would scowl a lot while shooting. He graduated with the class of 1951. Gary was a Korean War veteran but entered after the truce was signed, so he missed combat. He said the most danger he was ever in was when he danced with a Korean girl who had been eating kimchi. He was honorably discharged in July 1956. Gary attended UND from 1951 – 1953, returning in 1956 to continue his education. He received his Bachelor of Philosophy in 1957 and his Law Degree in 1960. After graduating, he returned to Dickinson and opened up his own law firm. He was elected to the County Justice on July 1, 1961, and also served on the ND Legislature from 1961-1963. Gary had the honor of introducing President Kennedy to the ND Democratic Convention in 1961. In 1963, while back in Grand Forks, ND visiting his college friends, he was introduced to Gloria Moser on a blind date. They were married on January 26, 1964, taking her daughter Pamela as his own, and later Debra and James were born. Gary worked for 34 years for the US Attorney’s Office in Fargo, ND until his retirement in 1997. He worked on some very high profile cases during his career. His most talked about case was the Lidgerwood arson case that killed two people. He also worked on many drug and weapon cases. Gary also worked part-time for the Census Bureau and Clay County Attorney’s office after his retirement. He was well known and highly respected throughout the legal/law enforcement community. After retirement, Gary and Gloria enjoyed going to Mexico for the winters. If not in Mexico, you could find them on Friday nights at the Speedway Restaurant in West Fargo and Saturdays at the Bowler, where they met many friends of all ages. During the weekday lunch hours, you could always find him at the Son’s of Norway having lunch with his buddies, if he wasn’t on the golf course. Gary had a huge passion for golfing, even scoring a hole in one at the Fargo Country Club on July 27, 1991, and enjoyed his trips to the casinos. Gary was a huge fan of all sports, especially all UND sports along with the Vikings and Twins. Gary is survived by his three children: Pamela Annear, Debbie (Daryl) Helbling, James (Angel) Annear; his grandchildren: Nicholas and Mitchel Taralson, Nicole and Elijah Helbling, Riley and Angelo Annear, Rex Clark and Brady Boeddekker; four great-granddaughters with another due in March 2021 and one great-grandson; brother, Spencer (Sharon) Annear; sisters-in-law, Phyllis Hagen and Linda Moser, and several nieces, nephews and cousins. Gary was preceded in death by his spouse Gloria, both parents, one brother, John Annear and several in-laws. The family would like to send a huge thank you to dad’s caretaker Ann for all of her help and support over the last couple of months, along with Hospice of the Red River Valley for their support. Memorials are preferred to Hospice of the RR Valley. A private memorial service will be held at Gethsemane Cathedral on Monday, December 14.

The family of Gary Annear created this Life Tributes page to make it easy to share your memories.

Send flowers to the Annear family.