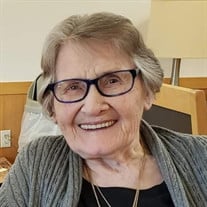 Florence's Memorial Service will be livestreamed here: https://vimeo.com/442737191 Florence Mae Liekhus, 90, peacefully passed away with family members by her side on July 26, 2020, at Rosewood on Broadway. She was born to Gottfried and Irene (Siewert) Heck in Kulm, ND on May 8, 1930. Florence grew up and attended rural schools near Kulm, ND (Dickey County). She graduated from the Dakota Business College in Fargo, ND. She worked for Fargo Iron & Metal as a secretary until she married. She met Donald Liekhus while being a passenger on the bus that he drove. They were married October 5, 1952. They had five children – 3 boys and 2 girls and raised them in Fargo. She worked from 1964-1968 at the Fargo Nursing Home which is now Rosewood on Broadway. From 1987 – 1995 she worked for Kelly Temporary Services. She loved cats, games (especially Dominoes and Yahtzee), puzzles, and polka music. One of her major achievements was donating 16 gallons of blood. Family was most important and she was the rock that held everyone together. She loved dancing at family reunions until the cows came home. A sharp wit and sassy until the end, Florence’s laugh caught your attention and if you weren’t right there, you hustled over to find out what you were missing. She is survived by four of her children: Terry (Mary) Liekhus of Oklahoma, Steven (Dianna) Liekhus of Minnesota, Robin (Renaye) Liekhus of Minnesota, Dawn (Michael) Cheatham of Indiana; 16 grandchildren, 17 great grandchildren, 2 great-great grandchildren; two brothers, Harris (Violet) Heck and Arnold Heck; and two sisters, Lillian Rost and Doris (Norman) Steiner. She was preceded in death by her husband, Donald Liekhus; daughter, Denise Townsend and her brother, Donald Heck. Wearing of masks at the service is preferred. The memorial service will be livestreamed here.

Florence's Memorial Service will be livestreamed here: https://vimeo.com/442737191 Florence Mae Liekhus, 90, peacefully passed away with family members by her side on July 26, 2020, at Rosewood on Broadway. She was born to Gottfried and Irene... View Obituary & Service Information

The family of Florence Mae Liekhus created this Life Tributes page to make it easy to share your memories.

Send flowers to the Liekhus family.