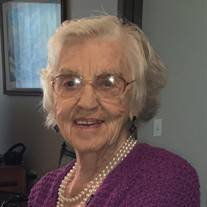 Evelyn L. Mason, 92, of Fargo North Dakota, passed away peacefully Friday, August 27, 2021, at Eventide Fargo, where she had been a resident for several years. She was under the care of hospice and surrounded by her loving family. Evelyn Lorraine (Gearman) Mason was born February 15, 1929, in Ortonville, MN to Oscar and Mathilda Pomerenke and grew up on a farm near Odessa, MN. She would marry Wesley Gearman, from Marietta, MN and together they had 5 children, eventually settling in Falcon Heights, MN. Following the untimely death of Wesley, Evelyn met and married William Mason, who also preceded her in death. While living in Falcon Heights, Evelyn worked as a secretary in the Sears Group Office. She and William (Bill) moved to Fargo in 1979 and enjoyed 26 years together. Evelyn enjoyed gardening, music, photography, and traveling. She and Bill were very active in the Silver Follies and other civic activities and performed and sang on stage numerous times. She was also an avid photographer and didn't let any event go by without chronicling it with a picture(s). She was active in woman's circle at church and other church related activities. Evelyn had a great sense of humor and was outgoing, eagerly reaching out to share a little of herself. Every new acquaintance to her was an opportunity for a new friend. Evelyn is survived by four of her five children: Candace Smith, Jeff Gearman (Nette), Jane Gearman, and Dan Gearman, one step-son, five grandchildren, and four great-grandchildren. Evelyn was preceded in death by her two husbands, Wes and Bill, by her son, John Gearman, two step-sons, and three siblings. A memorial service celebrating Evelyn's life will take place when environmental safety concerns have lessened. An announcement will be posted for the date and time of the celebration. She will be buried in Marietta, MN, along side Wesley. Memorial donations are preferred to First Lutheran Church, Fargo, ND.

Evelyn L. Mason, 92, of Fargo North Dakota, passed away peacefully Friday, August 27, 2021, at Eventide Fargo, where she had been a resident for several years. She was under the care of hospice and surrounded by her loving family. Evelyn Lorraine... View Obituary & Service Information

The family of Evelyn Lorraine Mason created this Life Tributes page to make it easy to share your memories.

Send flowers to the Mason family.