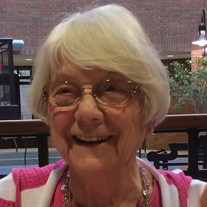 Eunice's Funeral Service will be live streamed here on Saturday, January 16, 2021 at 1:00 PM: https://boxcast.tv/view/service-for-eunice-thorson-ebn0f1ii8jgguahyfpqm Eunice Thorson, 94, of Fargo, ND, died at Bethany Homes in Fargo, on December 24, 2020. Eunice was born on June 4, 1926, to Carl and Alvina (Buck) Stumpf on their farm in Pierce County, WI. She attended "Wilson." one-room country school for eight years graduated in 1944 from Ellsworth High School and attended one year at Washington State University in Pullman, WA. Eunice loved her parents and family and was grateful for farm life, being close to family and nature. During World War II, Eunice volunteered at the hospital as a Red Cross worker, bringing hope to wounded soldiers, at the courthouse creating ration books, at the USO Center, and worked in two different defense plants. On September 20, 1947, Eunice married William (Bill) Thorson, whom she loved and was married to for 65 years. For the first two years, they lived in Minneapolis, while Bill attended the University of MN. Bill's GMAC position took them to Bismarck, ND, and then in 1951 moved to Fargo, where they raised their five children. Eunice was a stay-at-home mom. Good relationships were a high priority. She invested heavily in her children mentally, physically, and spiritually. After all the kids had graduated from high school, at the age of 55, she launched a 15-year career in real estate. Bill and Eunice helped charter Hope Lutheran Church, and both had a faith in Jesus that anchored them throughout their life. At the age of 25, Eunice entered into a personal relationship with Jesus, and it continued to grow through the word of God, several pastors, many friends she studied with, trials and snares, good music, and just plain asking for forgiveness and trusting in the Holy Spirit to guide. She believed it doesn't take much faith to be safe, but it takes faith to dream, dreams, and take risks. She was a blessed person and felt she, too, should be a blessing. Eunice believed that God said to her, as well as to Joshua, "I will be with you wherever you go." Joshua 1:9 God and His word, bible studies, marriage, family, a good conversation, reading, learning, gardening, traveling, and the wonders of nature are things that she loved and found meaningful. Eunice is preceded in death by her husband, Bill, an infant son James, her parents, one brother, Virgil Stumpf, two sisters, Jeanette (Stumpf) Ness and Geraldine (Stumpf) Johnson. She is survived by two sons and three daughters; Douglas Thorson (Sherry), Fergus Falls, MN, Scott Dale. Thorson (Laurie), Sioux Falls, SD, Debra Denison (Robb), Minneapolis, MN, Janele Nelson (Brian), Puyallup, WA, Julene Oxton (John), Lakeville, MN, 20 grandchildren and 30 great-grandchildren. Any memorials are to be given to Hope Lutheran Church, which she loved dearly. Eunice's Celebration of Life will be held Saturday, January 16, 2021 at 1:00 PM at Hope Lutheran Church, South Campus, and will be live streamed here as well.

The family of Eunice Thorson created this Life Tributes page to make it easy to share your memories.

Eunice&#39;s Funeral Service will be live streamed here on Saturday,...

Send flowers to the Thorson family.