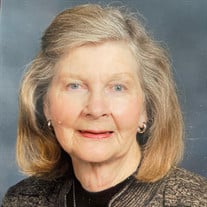 Eunice's Funeral Service can be seen here: https://vimeo.com/672523260 Eunice's Tribute Video can be viewed here: https://www.tributeslides.com/tributes/show/59RJQ9JHQ8F5K77Q Eunice Marietta Jones passed away on Sunday, January 30, 2022, surrounded by her family in her home in Fargo, North Dakota, at the age of 92. Eunice was born on June 1, 1929, to Otto and Helga Skurdahl in Aneta, North Dakota. She was one of 10 children, with seven girls and three boys. She was raised on a small family farm on 160 acres of land, which they farmed only with horses. She was the only daughter who worked on the farm. Even when she was a young woman, and when her older brothers went to fight in World War II, her father asked her to come back to work on the farm, which she did. Eunice loved horses, especially her horse Jiggs, and she became so skilled at horseback riding that she could ride bareback. Eunice graduated from Aneta High School and thereafter attended Interstate Business College in Fargo, North Dakota, where she obtained a degree. Shortly after graduating, she began working at Metropolitan Federal Bank (originally Metropolitan Savings and Loan), where she met the love of her life, Norman Jones. Norman loved to watch Eunice play softball and took her to see a golf course for the first time on their first date. Norman and Eunice were married on December 20, 1950, by a pastor from First Lutheran Church in the Jones home in Fargo, North Dakota. After they were married, Norman's National Guard unit was called up during the Korean War, and the couple moved to Camp Rucker, Alabama. Eunice passed the civil service exam and was immediately given work as a stenographer in the quartermaster corps. After their service, the couple returned to Fargo, and Eunice was expecting her first child. There, they raised four children, Janet, Marietta, Mark, and Steven Jones. Eunice was very involved in the First Lutheran Church, singing in the choir for countless years, and was actively involved in numerous Bible studies, including Bible Study Fellowship and Miriam Circle. Eunice was a member of Chapter AU of P.E.O., an international organization dedicated to providing educational opportunities to young women. Eunice was incredibly generous, including making charitable donations to Luther Seminary and Concordia College, among others. Eunice had many talents, including being a beautiful singer, a water skier and snow skier, snow skiing for over 45 years, and an avid bow hunter, impressively being one of the first women in North Dakota to shoot a buck with a bow and arrow. Eunice was also an active member of the Sports Section of Fine Arts, which is where she first learned archery. Above all, Eunice loved her family, and the greatest joy in her life was spending time with her family, especially with her beloved husband, her children, grandchildren, and great-grandchildren. Eunice is survived by her husband of 71 years, Norman Jones (Fargo, ND), her brother Elmer Skurdahl (Portland, OR), her sister Janet Paul (Kennewick, WA), her special sisters-in-law, Nancy Jones Schafer (Fargo, ND), and Mary Ellen Jones Olson (Fergus Falls, MN); her children, Janet Jones (Fargo, ND), Marietta (Mark) Skalberg (Colorado Springs, CO), Mark (Niloufar) Jones (Pleasanton, CA), Steven (Dina) Jones (Torrance, CA); and her grandchildren, Blake (Kelsey) Hankey (Harwood, ND), Rosha Jones (Imran Khan) (San Ramon, CA), Bobby (Tamaki) Jones (Foster City, CA), Sara (Bill) Burdge (San Clemente, CA), John Skalberg (Clearwater, FL), Janelle and Joshua Jones (Torrance, CA), and great-grandchildren, Lucas Hankey, and Noah and Noor Khan. Memorials may be given to Concordia College, First Lutheran Church, Luther Seminary, or Hospice of the Red River Valley.

The family of Eunice Marietta Jones created this Life Tributes page to make it easy to share your memories.