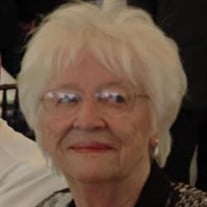 Esther Pauline Bakken Crosby was born on November 9, 1924 in rural Sebeka, MN. to parents Carl and Marie (Agrimson) Bakken. After the death of her mother in 1925 she and her four siblings lived with her grandmother near Peterson, Mn. Her father married Mabel Norem in 1929 and the family moved back to the farm at Sebeka. Five more children were born to this union in the next few years. The times in the country during the depression years were difficult. Esther would talk about the extreme poverty they experienced, yet with their strong faith and the help of extended family, the close-knit family persevered. Education was always a priority, though at times the children had to remain home to care for children and work on the farm. Even so, Esther was an excellent student (and an exceptional speller) and graduated from Sebeka High School in 1943. She spent the following year with her sister in Harrisburg, PA and worked at an Army Air Force Depot during WWII. Esther returned to MN with little money and support but she enrolled at Augsburg College and graduated with a B.A. degree in Secondary Education. She began her teaching career in 1948 when she accepted a teaching position in Appleton, MN. One snowy evening the following year, she happened to meet Warren Crosby, an Appleton resident. They were married on November 18, 1950. In December that year, the 47th Division of the National Guard, of which Warren was a member, was activated and deployed to Camp Rucker, AL. Esther joined him several months later and they lived in Enterprise, AL for 2 years. A daughter, Debra, was born there in 1951. Following discharge, they moved back to Appleton where Warren began his barbering business. A daughter, Mary, was born in 1953 and a son, Tim, was born in 1956. The following years were busy ones. In addition to being a devoted mother, Esther periodically taught part-time in Appleton and Milan or was a substitute teacher. She was active in Girl Scouts, Legion Auxiliary, and Zion Lutheran Church. She also enjoyed bridge club and many other social activities with life-long friends. In 1972, Esther, Warren, and Tim moved to Princeton, MN where Warren had accepted a job with Midland Cooperatives. Esther worked as a substitute teacher and counselor’s secretary in the Princeton schools. There were many new life-long friendships established in Princeton. In 1979, Midland/Land 0’ Lakes transferred Warren to Granite Falls, MN. She started her hobby of collecting and selling antiques and was part of an antique cooperative store. Esther also continued to substitute teach and was active in the Granite Falls Lutheran Church, Legion Auxiliary, and the Granite Falls Arts Council Gallery. Esther and Warren enjoyed many activities at the Killowatt Community Center, especially the Golden Grands gatherings three times a week. Again, many more people would call her a good friend. Esther and Warren spent their retirement years traveling in their RV visiting friends and relatives all over the country. In 2017, Esther and Warren moved to Eventide Assisted Living in Moorhead MN to be closer to family. They participated in many of the activities offered at Eventide. Esther especially enjoyed the book clubs and Bible study groups. Preceding her in death are her mother, father, stepmother, 3 sisters, and 4 brothers. A brother and sister are surviving family members. Grateful for their 69 ½ years of marriage is her loving husband, Warren. Grateful for her love and support for so many years are daughters, Debra, Fargo ND and Mary, Moorhead, MN; and son, Tim, Princeton, MN. Also grateful for their devoted and proud grandmother/great-grandmother are Jason and Ann Crosby (daughter, Sophia), Cheryl Crosby (daughter, Evalina Messerschmidt), Alex and Stephanie Pullen (sons, Mateo and Luca and daughter, Camila), Emily Goerndt, Hayley Pullen and Joe Davis, Cassie Crosby, and Benjamin Goerndt. One of Esther’s greatest joys were the family gatherings for holidays and camping. A memorial service will be held on June 27. Due to the pandemic, it will be a private service with consideration for the health of everyone. Blessed be the memory of Esther Pauline Bakken Crosby.

Esther Pauline Bakken Crosby was born on November 9, 1924 in rural Sebeka, MN. to parents Carl and Marie (Agrimson) Bakken. After the death of her mother in 1925 she and her four siblings lived with her grandmother near Peterson, Mn. Her father... View Obituary & Service Information

The family of Esther Pauline Crosby created this Life Tributes page to make it easy to share your memories.

Send flowers to the Crosby family.