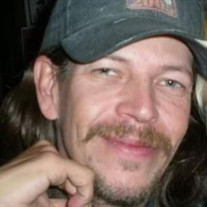 Eric's service can be viewed here: https://vimeo.com/586914658 Eric Nerpel was brought into the world on April 23rd, 1970 in Rolla, North Dakota, and raised in Bottineau, North Dakota. He was one of four siblings alongside Gina LaCroix, Gabriel LaCroix, and Maria Gleason-LaCroix. As a kid, Eric was always dancing to the beat of his own drum. A self-learner of many talents, Eric had a passion for breaking down electronics, machinery, automobiles, and anything that consist of wires, gasoline & tools. As an adult, Eric traveled all over the United States and spent time living in Nevada, Colorado, North Dakota, and Minnesota. No matter where Eric lived, he either brought the party along with him while he worked on the hundreds of cars/motorcycles that friends, family, and close associates brought across his unique aura. More often than not, if you could find Eric in a garage working on a project, you may catch him (...catch him if you can) riding on several self-built motorcycles or sports cars (His White BMW 5-Series Sedan is considered one of his Magnum Opus of projects). Eric's exterior of his build was made for adventure; his slight frame held up by well-worn denim jeans, black leather boots, and any baseball cap that laid around complemented and sustained the intelligence and "can-do-anything" attitude which surely was attractive whenever a person had a chance to sit down and have a conversation with him (preferably with a cigarette and Mountain Dew). Any conversation with Eric could begin all morning and carry on way past midnight... Eric is preceded in death by Maria Gleason-LaCroix (Sister), his Grandparents Eleanor & Clifford Nerpel. More importantly, Eric is survived by his Mother, Katherin; Step dad Gregory LaCroix; Brother Gabriel LaCroix; his Sister Gina LaCroix and kin-in-spirit Chuck Pedersen; Son Zach Nerpel and Daughter Morgan Nerpel... One of his proudest moments in life was witnessing his daughter's wedding in 2021. He will be remembered dearly by a vast list of friends, comrades that he rode motorcycles with, and people who were blessed to get assistance on any and all projects that Eric took a task working on. Ride-On... Ride Free... ~Ride in Peace~ Eric's family has created a fund here to help with memorial costs: https://gofund.me/9dc18de7

Eric's service can be viewed here: https://vimeo.com/586914658 Eric Nerpel was brought into the world on April 23rd, 1970 in Rolla, North Dakota, and raised in Bottineau, North Dakota. He was one of four siblings alongside Gina LaCroix, Gabriel... View Obituary & Service Information

The family of Eric Todd Nerpel created this Life Tributes page to make it easy to share your memories.

Send flowers to the Nerpel family.