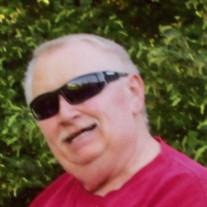 Ennis Mastrud, 70, of Fargo, passed away on Sunday, October 25, 2020, in Essentia Health, surrounded by family. Ennis Ivan Mastrud was born October 26, 1949, in Northwood, ND, to Conrad and Estella (Pladson) Mastrud. Ennis was the fifth of seven siblings. The family moved to Fargo from Hatton, ND, when he was a child. Ennis graduated from Fargo North High in 1967. After high school, he enlisted in the US Navy as a Corpsman, stationed in Yokosuka, Japan. After being honorably discharged, he returned to Fargo and worked at the VA Hospital. In 1971, he was married to Lois Eininger in Detroit Lakes, MN. They had two children, Scott and Sarah. He worked for Diebold Nixdorf being based in Billings, MT but traveled as an electronics technician in different states. Ennis worked later for Simplex in Billings, Helena, and Fargo until his retirement, then working part-time jobs to keep himself busy. Ennis enjoyed riding his motorcycle, western movies, fishing and hunting, and collecting antique radios. He volunteered with the VVA (Vietnam Veterans of America) and his friend Pat, where he was a lifetime member. He looked forward to visits with his grandchildren and being able to sight-see on his motorcycle road trips. He will be missed dearly by family and friends. Ennis was preceded in death by his parents, brothers, David, Neil, and Leslie (Pinky). He is survived by his daughter, Sarah (Phil) Colbrese, Billings, MT and son, Scott Mastrud; his grandchildren, Veda and Neil Mastrud, Elias, Myra and Benjamin Colbrese; his ex-wife and friend, Lois Mastrud, Billings, MT; sisters, Mary Korsmo, Mesa, AZ, Naomi Lundeen, Fargo, ND, and brother, Keith (Dorothy) Mastrud, Fargo, ND, along with many nieces and nephews. A memorial service will be held at a later date.

Ennis Mastrud, 70, of Fargo, passed away on Sunday, October 25, 2020, in Essentia Health, surrounded by family. Ennis Ivan Mastrud was born October 26, 1949, in Northwood, ND, to Conrad and Estella (Pladson) Mastrud. Ennis was the fifth of... View Obituary & Service Information

The family of Ennis Ivan Mastrud created this Life Tributes page to make it easy to share your memories.

Send flowers to the Mastrud family.