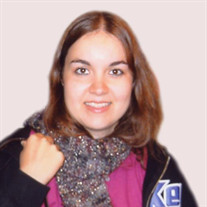 Emily Louise Wollin, 38, was born in Fargo, ND on August 8, 1981 to Charles and Jennie Rousu. She died May 26, 2020 in a house fire in Fargo. She was the youngest in her family and she grew up living with four brothers who often gave her guidance and advice. In fact, the four of them were her sponsors when she was baptized as an infant, and they probably took their responsibility seriously. She also had a close friendship with four girls from school. Their teacher at Clara Barton referred to them as "the committee"....because they always made their decisions corporately. The girls had been friends since 3rd grade, and they did have a lot of fun together-- putting on various performances, e.g. circuses, art shows, having a garage band (Emily played piano, and violin as well as the important one: GUITAR), having overnights, etc. During her high school years, she was one of 42 students across the USA who were awarded a study trip to Germany sponsored by the AATG and the German government. The American students who were selected lived with German families, and attended school (Gymnasium) with their age mates in the German families. They also got to see various points of interest and historic sites in Germany. Her tour of Auschwitz had a great impact on her. She also became a committed Christian during these years, and went on various mission trips to witness for Christ and help where needed. During one trip she received adult (believer's) baptism in the Pacific Ocean. During the time she spent in Europe, she participated in a mission sponsored witness for Jesus at Trafalgar Square in London which was held during Easter break. She wanted to be a missionary, and later--after college-- she attended the UND Summer Institute of Linguistics with the intention of working with Wycliffe Bible Translators. Emily graduated from Fargo South in 1999. She was offered a full music scholarship to Concordia, but she thought they were too liberal, so she studied Music and Communications at MSU. At UND she chose to major in French and German, and spent a year at Universite Lille 3 in France. (She brought back no souvenirs; she spent all her money trying to help the poor beggars who reached out to her as she passed on the streets of Paris and Lille.) Her senior year, she was back at UND where she was a Teaching Assistant, a member of Mortar Board, and part of the string ensemble that played for graduation at UND. She graduated Magna Cum Laude in 2005. She worked for a firm in Minneapolis, MN, and later for Digi-key in Thief River Falls, MN as a Global Sales Representative- Bilingual French. Emily and Andrew Wollin were married on September 13, 2008 in Thief River Falls, and their son, Andrew, was born July 7, 2012 in Fargo. Little Andrew was always a great joy in her life. She is survived by her son, Andrew Wollin; her parents, six half-siblings: Cindy Rousu, Las Vegas, Nevada; Debra Lariccia (Bob), Spencer, Ohio; Michael Rousu (Julie), Callaway, Minnesota; Keenan Schuler (Renae), New London, Wisconsin; William Schuler, Fargo, North Dakota; Erich Schuler (Kristi) Bedford, Texas, five nieces, and three nephews. She was preceded in death by her grandparents and one nephew, and several uncles and aunts. A Memorial Service is scheduled for June 13 at 10:00 AM at St. Paul's Free Lutheran Church located at 2802 12th Street South, Fargo, ND. Rest in Peace, Dear Emily

Emily Louise Wollin, 38, was born in Fargo, ND on August 8, 1981 to Charles and Jennie Rousu. She died May 26, 2020 in a house fire in Fargo. She was the youngest in her family and she grew up living with four brothers who often gave her... View Obituary & Service Information

The family of Emily Louise Wollin created this Life Tributes page to make it easy to share your memories.

Send flowers to the Wollin family.