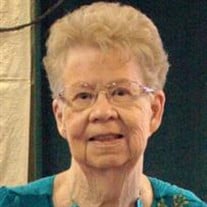 Emily Mae (Solseth) Baker, age 93, died Wednesday, October 7, 2020, at home surrounded by her family. Special thanks to the wonderful women of Ethos Hospice who supported her and her family in her end of life journey. Emily Mae Eileen Solseth was born March 21, 1927, to Otto and Johanna (Sjomling) Solseth at home near Tioga, ND. She grew up on the family homestead near Tioga, moving to Cando, ND with her parents as a teenager. Emily graduated from Cando High School and worked for First National Bank until after her marriage to Theodore (Ted) James Baker of Cando, on May 2, 1952. While living in Cando, she was active in United Methodist Church Women, Entre Nous and Homemakers clubs, as well as supporting Ted’s work in the church and with the American Legion. She and Ted had six children. Emily worked at the Towner County Treasurer’s Office and was later elected County Treasurer, a position she held until leaving Cando after Ted’s sudden death in May 1980. While serving as County Treasurer she oversaw the first computerization of tax records. Emily lived and worked in Minot throughout the late 1980s and 90s, and moved to Fargo in 2012 where she continued to enjoy an active life of crafting, dancing, and socializing. She was a member of Hope Lutheran Church, south campus. In late 2018, following a decline in health and a brief time in residence at Bethany, she joined with her daughter, Laurie, and daughter-in-law, Gail Wischmann, at their home in Moorhead, enjoying walks in the neighborhood, painting, reading and visits from family, friends and the neighborhood children. Emily is survived by daughters Laurie Baker (Gail Wischmann), Moorhead, MN, Beverly Baker (James Miller), Portland, ND, Connie (Reuben) Samuelson, East Grand Forks, ND, and Janet Baker, Longmont, CO and by son Jerrold “Jerry” (Lauri Westerlind) Baker, Fruita, CO, seven grandchildren, three great-grandchildren and many wonderful nieces and nephews. She was preceded in death by her beloved husband, Ted, and her son, William (Bill), as well as all of her brothers and sisters. Memorial and internment are planned for Summer 2021 at the IOOF Cemetery, Cando, ND. In lieu of cards or flowers please the family prefers memorials to Ethos Hospice, 3361 45th St S, Fargo, ND 58104.

Emily Mae (Solseth) Baker, age 93, died Wednesday, October 7, 2020, at home surrounded by her family. Special thanks to the wonderful women of Ethos Hospice who supported her and her family in her end of life journey. Emily Mae Eileen Solseth... View Obituary & Service Information

The family of Emily Mae Baker created this Life Tributes page to make it easy to share your memories.

Send flowers to the Baker family.