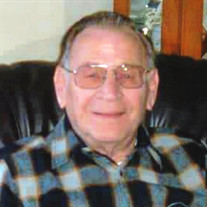 THE FUNERAL SERVICE HAS BEEN POSTPONED. We will update the service times when it has been re-scheduled. Thank you. Elwood (Al) Jerome Meyer, 86, of Moorhead, MN, died on Saturday, September 19, 2020, under the care of Hospice at Sheyenne Crossing in West Fargo, ND, with his wife Arlene and daughter Vicky by his side. Elwood (Al) Jerome Meyer was born September 12, 1934, to August and Sena (Rasmussen) Meyer of Fargo, ND. He attended school at Oak Grove Lutheran High. In 1952, Al met the love of his life, Arlene C. Larson of Ulen, MN. They were joined in marriage on July 14, 1954, in Hitterdahl, MN. Shortly after their marriage, they moved to Montana where Al was employed for Anaconda Copper Mine where he drove a rail train. After several months, they moved back to Fargo to start their family. Al started out driving truck for Fargo Freight, where he felt like Fred Flintstone because the truck he drove was so bad he could see the road through the floorboards. He then elevated his career by getting a job with H&R Block. Al was highly intelligent and knew his numbers. After just 10 short years, he was promoted to Regional Director overseeing satellite offices in North Dakota, South Dakota, and Minnesota. He retired his career with H&R Block in 1987. Al worked extremely hard so every summer he could bring his family on extravagant trips or he would often rent cottages for the summer months to spend time with family and friends. He had a special love for the lakes, so after his retirement, he built his own lake house on Upper Cormorant. Al was very skilled in woodworking and everything in general. He was a “Jack of all trades”, plus he was too cheap to pay anyone else to do the job that he knew he could handle. Al loved working in his yard at the lake. He loved mowing the greens at Rolling Hills Golf Course, so he did not have to pay to golf! Al was an avid sports fan. If he was not playing it with his kids, he was watching it on television. At the lake, he loved to play games like kick-the-can and Frisbee golf with his kids and grandkids and shooting off fireworks on the 4th of July! In his earlier years, Al enjoyed playing softball and bowling. Al was so good at fast pitch softball, he was honored at the Mickelson Baseball Field Hall of Fame for the best pitcher in the region. In the winter months, Al and Arlene would spend time in Arizona with their son Mike and his wife Elizabeth. Al is survived by his wife Arlene Meyer of Moorhead, MN, daughter, Vicky Dillenburg, son, Michael (Elizabeth) Meyer, daughter, Lynnette (William) Devine, and son Gregory (Sharon) Meyer; grandchildren, Shane (Lisa) Brewer, Nathan Brewer, Lindsey (Anthony) Giuliodibari; Christopher (Sorina) Meyer, Brendan Devine, Seamus Devine, Abigail Devine, Samantha Meyer and Shelby Meyer; great-grandchildren, Gage and Sadie Brewer and Wyatt and Lilly Meyer.

THE FUNERAL SERVICE HAS BEEN POSTPONED. We will update the service times when it has been re-scheduled. Thank you. Elwood (Al) Jerome Meyer, 86, of Moorhead, MN, died on Saturday, September 19, 2020, under the care of Hospice at Sheyenne Crossing... View Obituary & Service Information

The family of Elwood "Al" Jerome Meyer created this Life Tributes page to make it easy to share your memories.

THE FUNERAL SERVICE HAS BEEN POSTPONED. We will update the service...

Send flowers to the Meyer family.