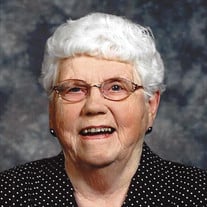 Elsie Olson passed away at 99 years of age on Sunday, October 10, 2021, at Sanford Medical Center. On Septeber 1, 1922, Elsie became the firstborn child of Ole and Gunhild (Berntson) Nypen on their rural Litchville, ND, farm. She grew up in the North LaMoure/Litchville area graduating from Litchville High School. A Litchville family provided room and board during the school year. After high school, she attended Valley City State Teachers College, earning her teaching degree. For two years, she taught in a one room schoolhouse in Black Loam Township, ND. After her second year, Orville S. Olson asked for her hand in marriage. He was stationed at Fort Lewis Army Base, Tacoma, Washington. She accepted and traveled by train to Tacoma. They were married on July 07, 1943, in Tacoma. They lived in the Fargo/Moorhead area for three years, followed by several small towns in southwestern ND. When Orville’s unit was activated for the Korean war, she moved with the children to Camp Rucker near Dothan, Alabama. After the activation, they moved back to ND and then to Springfield, Oregon. In 1955 they moved back to ND, settling in Wahpeton. After 5 years, they moved to Billings, MT, for a short time. In 1960, they returned to Fargo. Elsie worked as a sales associate with J.C. Penny in Fargo for a short time. She then started as a secretary with the NDSU housing office, eventually assuming the position of office manager. She enjoyed working with her coworkers and students. Orville and Elsie, along with many families and friends, enjoyed Meadow Lake Campground for many summers, first in a tent and then a “pop out” camper. She and Orville also traveled to Norway to meet and visit family. Orville passed away early in 1982. After many years, she retired from NDSU. Her retirement party was a memorable affair. It included visits by a Fargo Police Officer and Fargo Mayor Jon Lindgren. For the next few years, Elsie traveled to Arizona with her sister Hjurdis Baeth. In time, she decided to forego winter months in Arizona. She continued to volunteer and be active in the Sons of Norway, Hope Lutheran Church (She and Orville were charter members) and the New Life Center. After a few years, she sold her home and moved into Trollwood Village Apartments. She made many new friends and continued her volunteer work. (If she wasn’t in her apartment, she normally could be found in the card room). After an extensive back surgery, she went to Villa Maria Nursing Home for recuperation and therapy. She announced to her children, “I like it here. I am staying.” Elsie enjoyed playing cards with family and friends at family gatherings, at work, at the Sons of Norway, at her Trollwood apartment, and at Villa Maria. She liked Whist, Patience, Merry Widow, Kings in the Corner and Cribbage. If no one wanted to play, she would play Solitaire. She was very competitive and a skilled player at all these games; she played cards the day before she passed away. As an avid NDSU Bison football fan, she and Orville would attend home football games. She watched the Bison Homecoming game on Saturday the 9th. It didn’t take too long before she announced, “They will win anyway” and went to her room. She is preceded in death by her parents; her husband; brothers, Leroy and Allen Nypen; her grandson, Benjamin Olson, and all her aunts and uncles. She is survived by her sister Hjurdis (Vern) Baeth, Springfield, OR; sons, Ardell (Audrey), Fargo, ND, Bradley (Barbara), Detroit Lakes, MN, Dwight (Margaret), Surprise, AZ, and daughter, Melody Heggeness, Billings, MT; 8 grandchildren: Matthew Olson, Andrea Rosenquist, Jessica March, Misty Heggeness, Stephanie Weisz, Jennifer Backes, Sherilyn Olson, Jodi Young; and 17 great-grandchildren: Lucas Weisz, Benjamin Olson, Caya Bahr, Eden Weisz, Austin Olson, Gabriel Backes, Noah March, Jacob Rosenquist, Peyton Backes, Nathaniel Backes, Magdalena Buscanan, Emily March, Santiago Buscanan, Nicholas Rosenquist, Benjamin Backes, Olivia Lindley, Esther Lindley. The family would like to thank the staff at SMP Health - St Catherine South (formerly Villa Maria) for the love and care provided Elsie during her years of residency, and to the medical staff at Sanford Health for their care and compassion to her and the family. In lieu of flowers, the family wishes all memorial contributions be made in Elsie’s name to the Sons of Norway, Kringen Lodge, Fargo. Elsie's tribute video can be viewed here: https://www.tributeslides.com/tributes/show/7BF72W5H26LLMT8J

Elsie Olson passed away at 99 years of age on Sunday, October 10, 2021, at Sanford Medical Center. On Septeber 1, 1922, Elsie became the firstborn child of Ole and Gunhild (Berntson) Nypen on their rural Litchville, ND, farm. She grew up in... View Obituary & Service Information

The family of Elsie Ardell Olson created this Life Tributes page to make it easy to share your memories.

Elsie Olson passed away at 99 years of age on Sunday, October...