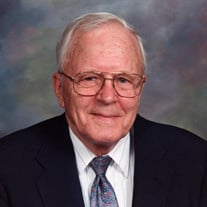 Elroy's service can be viewed here: https://vimeo.com/651707738 Elroy Berneil Bjerke, 93, originally of Hatton, North Dakota, died Friday, November 19, at Eventide Sheyenne Crossings, where he lived with his beloved wife, Ada. Elroy was born March 6, 1928, on a family farm in Hatton, North Dakota, to Oliver and Andrea Bjerke. He, his brothers, Dennis, Dale, and Richard, and his sisters, Ardath, Merillyn, and Rachel. Elroy attended a one-room country school just south of his farm through eighth grade, then dedicated himself full-time to the farm. Elroy married Ada Goughner on January 17, 1947. They and their five children lived in Hatton, Borup, Maddock, and Georgetown, progressively following Elroy's successful career in elevator management. Elroy worked for the Dean Osking Potato Co. and Standard Oil Co. before starting at the GTA Elevator in Borup. In 1964, they moved to Maddock, where Elroy managed the Maddock Farmers Grain until moving to Georgetown, Minnesota, in 1978. He retired as manager of the Farmers Elevator in Georgetown in 1993. Elroy and Ada's family grew to include ten grandchildren and 17 great-grandchildren. Elroy would often take grandchildren to the elevator with him to play at his desk and amuse the farmers. Later, he was known to gift $2 bills and plenty of candy to his great-grandchildren at every cherished visit. The children brought him great joy, as he loved to teach them naughty Norwegian phrases and tease. The children loved to crawl up on Elroy's lap, and he was always up to oblige. Elroy and Ada are faithful members of Peace Lutheran Church and always had a pot of coffee on and a seat at the table for their pastors and neighbors. In 1997, the couple moved into Fargo, where Elroy enjoyed serving his neighbors through assisting with snow removal and general maintenance. Elroy and Ada entered assisted living together in Moorhead. Elroy is survived by his wife of 75 years, Ada, and their children Robert Elroy (Jennifer), Arlyn, Sharon (Richard), Jennifer (Lance), and Rodney. He leaves behind brother Richard and sisters Ardath, Rachel, and Merillyn, 10 grandchildren, and 17 great-grandchildren. He was preceded in death by his parents and brothers Dennis and Dale.

The family of Elroy Berneil Bjerke created this Life Tributes page to make it easy to share your memories.

Send flowers to the Bjerke family.