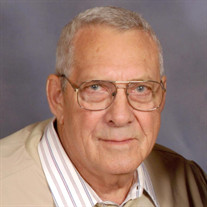 Elliotte Groenwold, 85, joined his heavenly Father April 6, 2020 with his wife and close family at his side at Essentia Hospital. Elliotte Lonnie was born November 24, 1934 to Herman J. and Bertina Groenwold in Norcross, Minnesota. He grew up on the farm at Norcross and later, Fargo where he was educated in the Fargo schools. He enlisted in the US Army in 1957 with active duty until 1959 at Fort Lewis, Washington and served in the reserves until 1963 when he was honorably discharged. While in active duty he achieved motor school training. He was united in marriage to Geraldine Johnson on June 17, 1960. They made their home in Fargo where they enjoyed almost 60 wonderful years. Elliotte was employed at the Fargo Fire Department from 1961 until 1995 after 33 years of service. During that time he worked part-time at Ames Sand & Gravel, Smith Inc., Frontier, and Nesheim Electric. After retiring, he worked at the Mark Brodshaw farm for 2 years and enjoyed farm life again. He enjoyed hunting, fishing, camping and motorcycling and his hobby of working in his garage, where he accomplished many projects and helped numerous friends and relatives with his superb skills as a talented self-taught handyman who could fix or make just about anything. He is survived by his wife Gerry, sister, Marcella Stack, brother, Curtis (Janice) Groenwold and numerous nieces, nephews and in-laws. He is preceded in death by his parents, and brother Harland Groenwold. Because of the global pandemic, the family will be having a private service on Tuesday, April 14, 2020 at 2:00 pm. The service will be live-streamed on hansonrunsvold.com. If you wish, memorials may be sent to The Salvation Army or Bethlehem Lutheran Church in Fargo.

Elliotte Groenwold, 85, joined his heavenly Father April 6, 2020 with his wife and close family at his side at Essentia Hospital. Elliotte Lonnie was born November 24, 1934 to Herman J. and Bertina Groenwold in Norcross, Minnesota. He grew... View Obituary & Service Information

The family of Elliotte Lonnie Groenwold created this Life Tributes page to make it easy to share your memories.

Send flowers to the Groenwold family.