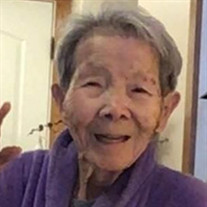 Elizabeth Yasuko (Kitagawa) Fujimoto was born to Masako and Yonoichi Kitagawa on August 29, 1928 in Los Angeles, CA. Her family is descended from Samurai. Her very lively personality was a testament to that heritage! Mom was the youngest of five children, sisters Yoneko, Mariko, Mieko, and brother Dave. Moms parents had a mom and pop grocery store in L.A. Mom helped in the store, sitting on a case of grape pop and eating the squished donuts from the donut case, washing them down with bottles of grape pop. Although they were poor, Moms family had a few brushes with fame. Charlie Chaplin filmed a scene for one of his movies at their store, and Marilyn Monroe was a classmate of her brother Dave. Mom followed her sisters and brother to school and sat outside her sister Marikos classroom window calling, Mariko! until the principal finally solved the problem by putting Mom in kindergarten. She was 4 years old and that is how she started school. Life changed for the family during World War II. Moms family, along with 120,000 Japanese-Americans living on the West Coast, were incarcerated in relocation centers during the War. Moms family was first evacuated to the Santa Anita racetrack, where they lived in a horse stall until the tar paper barracks at Manzanar were completed. A chubby 130 pounds when she entered Manzanar, she quickly shed 40 pounds in the desert heat, which concerned the doctor and earned her a ticket to receive milk, which she promptly gave to her brother Dave. After the war, the family moved to Minneapolis, MN where Mom graduated from Mpls Central High School. Always athletic, Mom was a member of a softball team. She was also a camp counselor and waterfront director at Lyman Lodge YWCA camp, and led canoe trips at Camp Menogyn. Mom pursued her interest in athletics, graduating with a degree in physical education from the University of Minnesota in 1950. She taught physical education at Ben Franklin Junior High in Fargo, North Dakota from 1950-1954. On June 5, 1954 Mom married George Fujimoto. It was not a sudden thing. Mom and Dad met in 1947. Dad has always been a quiet person so after seven years of dating, Mom told Dad she was moving to California. Dad asked her if she would consider staying (in Mpls). She asked if he was asking her to marry him. He said yes. They settled in Hopkins, MN and raised daughter Leah (born in 1955) and son Dale (bon in 1957). Mom was a stay-at-home mom, taking care of us and putting many a fingernail dent into her Styrofoam coffee cups while watching Dales Little League games. Her stay-at-home days ended when she started working part-time helping with special education when Leah and Dale were in junior high. That led to her going back to the U of MN to get her special education certification, and a fulltime job teaching Special Education at Gatewood Elementary School in Hopkins. Mom worked tirelessly to figure out ways to help her students learn. She retired from teaching when she was 64. At her retirement party, Mom appeared wearing extra clothing. She told the crowd that she had always wanted to do this. She turned on a tape player, removed and flung the extra clothing, one piece at a time, out into the room, to The Stripper. When her co-workers asked Leah and Dale if they were surprised, they replied nonchalantly, No, she does it all the time! Mom remained active in retirement with golf, aerobics, workouts at the health club, volunteering at the food shelf and church, vacations with Dad, socializing with friends and neighbors, and spending holidays with family. Much to the delight of Leah and her family, after 63 years Mom returned to Fargo with Dad in 2017. They made their new home at Bethany on 42nd. Mom enjoyed living at Bethany so much the activities, the residents, the caring staff, and best of all sharing it all with her much loved husband George, aka The Wise Old Owl. The family wishes to thank the staff at Bethany on 42nd and Ethos Hospice staff for all their loving care of our Mom.

Elizabeth Yasuko (Kitagawa) Fujimoto was born to Masako and Yonoichi Kitagawa on August 29, 1928 in Los Angeles, CA. Her family is descended from Samurai. Her very lively personality was a testament to that heritage! Mom was the youngest of... View Obituary & Service Information

The family of Elizabeth Yasuko Fujimoto created this Life Tributes page to make it easy to share your memories.

Elizabeth Yasuko (Kitagawa) Fujimoto was born to Masako and Yonoichi...

Send flowers to the Fujimoto family.